The Night of the Fire: A Mystery (Ann Lindell Mysteries #8) (Hardcover) 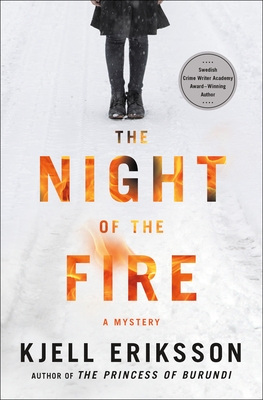 This is book number 8 in the Ann Lindell Mysteries series.

Police inspector Ann Lindell has left the Uppsala police and is living a quiet life, producing local cheese in a small town in Uppland. But life in the country is not as idyllic as it seems. On New Year’s Eve someone sets fire to the former village school which is now a home for asylum seekers, and three people are killed. Ann Lindell’s investigative instincts come back to life and soon she takes on the case. She is contacted by a person who has been involved in a previous investigation and who wants to warn her. His message is short and clear: Many will die. A few weeks later a bomb explodes in a suburb of Stockholm.

Kjell Eriksson wrote seven highly acclaimed novels about Ann Lindell, beginning with award-winner The Princess of Burundi, and now, after ten years, he returns to the Uppsala region and his sympathetic police inspector. The Night of the Fire is the first of two new volumes featuring Ann Lindell.

"Rich with characters struggling to make sense of a hate-filled political and moral landscape quite different from the one they grew up in." --Wall Street Journal