Stay and Fight: A Novel (Paperback) 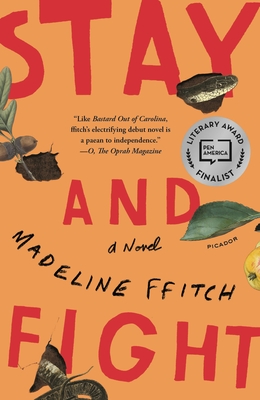 This is a powerhouse debut novel featuring some quirky outsider characters that feel so strangely familiar. When a young idealistic Northwest city girl moves deep into the Appalachians to live off the land, we get a deeply layered novel that is somehow a tenderhearted family story about class while also being absolutely hilarious. Seamlessly alternating between four different first-person perspectives, Madeline ffitch’s writing is perfectly voiced. Stay and Fight is a fantastic novel of these times.

“From the first page of this debut novel set deep in Appalachia, we know that Stay and Fight is aptly named, for the way it explores the constant struggle of its characters to stay where they are while fighting for a better existence. ffitch expertly shows us the romantic, albeit brutally raw, reality of living off the grid (on one’s own terms, most importantly), a feat she somehow accomplishes in the most modestly ambitious way. Stay and Fight is fantastic.”
— Caridad Cole, Community Bookstore, Brooklyn, NY

"Like Bastard Out of Carolina, ffitch's electrifying debut novel is a paean to independence and a protest against the materialism of our age." —O: The Oprah Magazine

Helen arrives in Appalachian Ohio full of love and her boyfriend’s ideas for living off the land. Too soon, with winter coming, he calls it quits. Helped by Rudy—her government-questioning, wisdom-spouting, seasonal-affective-disordered boss—and a neighbor couple, Helen makes it to spring. Those neighbors, Karen and Lily, are awaiting the arrival of their first child, a boy, which means their time at the Women’s Land Trust must end.

So Helen invites the new family to throw in with her—they’ll split the work and the food, build a house, and make a life that sustains them, if barely, for years. Then young Perley decides he wants to go to school. And Rudy sets up a fruit-tree nursery on the pipeline easement edging their land. The outside world is brought clamoring into their makeshift family.

Set in a region known for its independent spirit, Stay and Fight shakes up what it means to be a family, to live well, to make peace with nature and make deals with the system. It is a protest novel that challenges our notions of effective action. It is a family novel that refuses to limit the term. And it is a marvel of storytelling that both breaks with tradition and celebrates it. Best of all, it is full of flawed, cantankerous, flesh-and-blood characters who remind us that conflict isn't the end of love, but the real beginning.

Absorbingly spun, perfectly voiced, and disruptively political, Madeline ffitch's Stay and Fight forces us to reimagine an Appalachia—and an America—we think we know. And it takes us, laughing and fighting, into a new understanding of what it means to love and to be free.

Madeline ffitch cofounded the punk theater company Missoula Oblongata and is part of the direct-action collective Appalachia Resist! Her writing has appeared in Tin House, Guernica, Granta, VICE, and Electric Literature, among other publications. She is the author of the story collection Valparaiso, Round the Horn.

Finalist for the Los Angeles Times Book Prize
Finalist for the PEN/Hemingway Award for Debut Novel
Finalist for the Lambda Literary Award for Lesbian Fiction
A Best Book of 2019 at Vulture
An Indie Next Selection
A Most Anticipated Book of July at The New York Times
A Book to Read in July at debutiful and A. V. Club
A Publishers Weekly Book of the Week

"Like Bastard Out of Carolina, ffitch's electrifying debut novel is a paean to independence and a protest against the materialism of our age."
—O: The Oprah Magazine

"The three-women trope gets a deliciously spirited spin in Madeline Ffitch’s debut novel Stay and Fight . . . The narrative plays out like Winter’s Bone with a dash of screwball as the self-described “wolf pack” attempts to live off the land, and the mothers work to raise a boy without the interference of the community, however well-intended . . . This book is packed with quick banter and unforgettable, deeply complicated characters, including a soft-hearted tree-trimmer named Rudy and many a raccoon, drake, and black snake."
—Lauren Mechling, Vanity Fair

“A contemporary feminist spin on the traditional pioneer novel . . . With Stay and Fight, ffitch aims to update the frontier narrative from a queer feminist perspective, spinning a tale of exodus from a cruel new America where pipelines and pollution pox the countryside . . . Stay and Fight succeeds in mapping the obscure psychological and emotional territory that defines a life caught between commitment and ambivalence, between rebellion and resignation.”
—Wes Enzinna, The New York Times

“Fantastic . . . If the powers that be turn this into an award-winning HBO drama, which they should, they better not fuck with ffitch's language, or I'll chain myself to an excavator. She balances her good, clean, quick hick sentences with the natural lyricism of just using the actual names of trees and power tools.”
—Rich Smith, The Stranger

"Stay and Fight is one of those rare books that simply knocked me over with the raw power of the writing and storytelling. I am so impressed with Madeline ffitch.”
—Vick Mickunas, WYSO Fresh Air

"Stay and Fight is smart and self-aware enough to refuse any confident solution toward forging intimacy and independence under our current sociopolitical circumstances. It knows that such a solution does not exist. Rather, there is staying, there is fighting, and there is fighting to stay."
—Scout Turkel, ZYZZYVA

"A thought-provoking examination of the independence and autonomy of the family unit . . . [Madeline ffitch] infuses the pages with a fierce and complex love of place. Stay and Fight is a dark warning about the environmental impact of fracking and pipelines, as well as an anthem to the families that we create."
—Kelly Roark, New City Lit

"A motley, makeshift family . . . must figure out how to preserve the things they love . . . and determine what's worth fighting against and for."
—Kristin Iversen, Nylon, "One of 35 Great Books to Read This Summer"

“Stay and Fight explodes time-old stereotypes about the land and its people, delivering instead some of the most well-drawn and fascinating characters in recent memory.”
—Amy Brady, Lit Hub

"A remarkable book—so knowing and generous, so gracefully written, you want to stand on a table and testify.”
—Jim Phillips, The Athens News

“Stay and Fight doesn’t take sides along clear moral lines. It scrambles those basic American polarities of nature—the unspoiled goodness and the seductive resources — into a relationship that feels new.”
—Paul Constant, The Seattle Review of Books

“Immersive and compelling, depicting the life of an Appalachian family that is equally unconventional and familiar . . . There is nothing flat or caricatured about the characters in ffitch’s novel . . . Stay and Fight carefully mixes an absurd humor with crushing devastation, so that we’re left incredulous about the circumstances and how we’ve arrived there.”
—E. M. Tran, The Los Angeles Review of Books

“ffitch flex[es] some finely honed talent with fictional conflict and plot, and as the prose hops perspective from the four central characters, including the wistfully complex Perley, we're engrossed in what’s next to a point of blind faith and hope.”
—Matthew Bedard, FLAUNT

“A story of family, land, and dispossession. Madeline ffitch’s penetrating novel turns on a couple, Lily and Karen, who must leave their space on a Women’s Land Trust in Appalachia when they give birth to a son. Their evolving sense of relationships, home, and society are rendered with pathos and precision.”
—Samuel Partal of Community Book Store, Brooklyn Paper

"A good, entertaining novel that redefines life and family."
—The Washington Book Review

"Remarkable and gripping . . . The story is told in the alternating voices of Helen, Karen, Lily, and Perley, and ffitch navigates their personalities beautifully, creating complex, brilliantly realized characters. As the stakes rise, for both the family and the preservation of the region, the novel skewers stereotypes and offers only a messy, real depiction of people who fully embody the imperative of the novel’s title. This is a stellar novel."
—Publishers Weekly, starred review

“[Stay and Fight] envisions a more compassionate world where people can improve the institutions that are holding fast to an antiquated, environment-wrecking sensibility.”
—Mark Athitakis, On The Seawall

“Madeline ffitch's powerful debut beautifully illustrates how the bonds forged during hardship can become the rope that saves you.”
—Luisa Smith, Book Passage

"A socially conscious story about environment, feminism, and children rights."
—Adam Vitcavage, debutiful, "6 Debut Books You Should Read This July"

"Rendered, through its multiple first-person perspectives, with wit and nuance . . . A cleareyed, largehearted take on the social protest novel."
—Kirkus

“Madeline ffitch is unafraid of a good fight. Her first novel is a rousing celebration of conflict, in particular the conflict that comes with being a family: unspoken tensions, philosophical disagreements, painful words, messy brawls. Stay and Fightmakes the powerful argument that fighting within a family is necessary, formative; it’s the practice that prepares us to fight for our families when the time comes. Hers is the fiercest, wisest book about parenting that I’ve read in a very long time.”
—Sarah Shun-lien Bynum, author of Ms. Hempel Chronicles

“If Carolyn Chute and Larry Brown and Carson McCullers had a love child, it might be Madeline ffitch’s brutal and brilliant debut novel, Stay and Fight. What a wise, funny, and shining story, born into the world just in time to teach us about friendship, hardship, self-reliance, and black rat snakes.”
—Bonnie Jo Campbell, author of Once Upon a River

“Madeline ffitch is one of the few real writers on the planet. And Stay and Fight is a real novel. ffitch has the real, funny, not funny, gorgeous, breathing world in her hands. She is giving it to you to hold for a while.”
—Carolyn Chute, author of The Beans of Egypt, Maine and Treat Us Like Dogs and We Will Become Wolves

“Mythic and particular, domestic and political, modest and ambitious, strange and familiar, Stay and Fight is a radical and ferocious success. The book disturbs the legacy of a frontier literature, and it points the way to a fresh conception of the Great American Novel.”
—Chris Bachelder, author of The Throwback Special

“In her debut novel, Madeline ffitch renders a loving and lawless portrait of a remarkable Appalachian family and the conventions that bind them with undeniable wit and brilliance. Fans of Joy Williams and Nell Zink will find a familiar, but ffitch brings her own compass to these woods and clears new ground while she’s out there. An enthralling debut.”
—Amelia Gray, author of Isadora

“Madeline ffitch’s debut offering brilliantly tackles tensions among three women from diverse backgrounds and their son, struggling for freedom, self-sufficiency, and coexistence with nature, whose habitat they share in the very backwater of southeast Ohio. These endearing but sometimes quirky characters are portrayed with so much brutal tenderness, humor, honesty, and wisdom. Complex emotions and an intersectional worldview expressed in sparse prose that echoes the lyricism of the Appalachian hills.”
—Zakes Mda, author of Ways of Dying