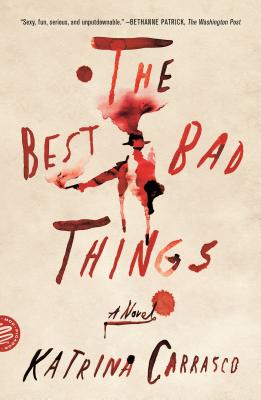 “Brazen, brawny, sexy . . . full of unforgettable characters and insatiable appetites. I was riveted. Painstakingly researched and pulsing with adrenaline, Carrasco’s debut will leave you thirsty for more.” —Lyndsay Faye, author of The Gods of Gotham

It is 1887, and Alma Rosales is on the hunt for stolen opium. Trained in espionage by the Pinkerton Detective Agency—but dismissed for bad behavior and a penchant for going undercover as a man—Alma now works for Delphine Beaumond, the seductive mastermind of a West Coast smuggling ring.

When product goes missing at their Washington Territory outpost, Alma is tasked with tracking the thief and recovering the drugs. In disguise as the scrappy dockworker Jack Camp, this should be easy—once she muscles her way into the local organization, wins the trust of the magnetic local boss and his boys, discovers the turncoat, and keeps them all from uncovering her secrets. All this, while sending coded dispatches to the circling Pinkerton agents to keep them from closing in.

Alma’s enjoying her dangerous game of shifting identities and double crosses as she fights for a promotion and an invitation back into Delphine’s bed. But it’s getting harder and harder to keep her cover stories straight and to know whom to trust. One wrong move and she could be unmasked: as a woman, as a traitor, or as a spy.

Katrina Carrasco holds an MFA in fiction from Portland State University, where she received the Tom and Phyllis Burnam Graduate Fiction Scholarship and the Tom Doulis Graduate Fiction Writing Award. Her work has appeared in Witness magazine, Post Road Magazine, Quaint Magazine, and other journals. The Best Bad Things is her first novel.

"Love crime fiction? Love historical fiction? Have I got a book for you! Meet Alma Rosales, a Mexican American, bisexual, cross-dressing, defrocked Pinkerton detective whose hunt for stolen opium on behalf of her boss and sometimes-lover Delphine Beaumond will keep you on the edge of your seat and maybe even wondering if you’ve lost your mind. Sexy, fun, serious and unputdownable." —Bethanne Patrick, The Washington Post

"A remarkably ambitious debut . . . [The Best Bad Things] crackles like a fast-traveling fire, immersing its reader in a time and place long gone . . . Carrasco is a gifted wordsmith . . . and an imaginative storyteller . . . Her greatest creation is Alma, a fearless adventurer who embraces her own duality: female/male, Latina/white (a Mexican American, Alma can change her skin tone depending on how much French-chalk powder she applies), agent/double agent." —Moira Macdonald, The Seattle Times

"I love books that focus on the artifice of gendered behavior, and weave the performance of identity into the larger performance of the spy . . . [A] wildly creative take on the genre." —Molly Odintz, Crime Reads

"The action scenes (not to mention the sex scenes) are plentiful and crackling with tension." —Maris Kreizman, Vulture

"A gender- and genre-bending tale . . . So evocative it ignites all the senses, even as the thunderous pacing leaves you scrambling to pick up on all the clues. The action scenes will fill your nose with the acrid smell of gunpowder, and leave your tongue with the metallic taste of blood. —Danette Chavez, AV/AUX

"Unusual, explosive, and highly quotable . . . Carrasco has a tight grip on her setting, which seethes with brawlers and cutthroats, and her plotting is crackerjack. . . Carrasco’s rapid-fire prose mirrors Alma’s sparking, barely contained energy. . . For all her sharp edges, she’s impossible not to fall in love with." —Kristin Centorcelli, Criminal Element

“In Alma Rosales, author Katrina Carrasco has created an unforgettable lead. . . and her ability to maintain control while juggling dual identities and agendas is awe-inspiring. The Best Bad Things is an intricately twisty, immensely enjoyable piece of crime fiction; a debut by a promising novelist worth watching.” —Blu Gilliand, Cemetery Dance

"This historical mystery takes on gender and sexuality in a way that many novels set in the 19th century do not, and it will give your book club lots of fodder for interesting conversations." —Elizabeth Roww and Kelly Gallucci, Bookish

"The Best Bad Things is a terrific historical crime novel, filled with action, atmosphere, twists, and glorious writing, but it is also a direct challenge to the idea that masculine and feminine identities are fixed opposites." —Neil Nyren, BookTrib

“Alma is a cross-dressing, bisexual, half-Mexican, badass woman who goes undercover in this historical fiction story set in 1887 Washington state. She lives life on the edge with gusto and nerve. An enjoyable ride for readers who like a fast-paced story and don’t mind graphic content.” —Joseph Jones, LibraryReads

"Carrasco's first novel explores every nook and cranny of what it is to be two-natured. Male and female, cop and criminal, marginalized and sovereign, best and bad . . . Readers looking for sexy, dangerous action unencumbered by apologetics will love this book. Carrasco is an author to watch." —Library Journal, starred review

“The best thing, upon opening The Best Bad Things, is to ensure you don’t have any plans for the next day or so. Instead, surrender to this book’s glorious race through the rain-soaked, crime-ridden streets of nineteenth-century Port Townsend. Katrina Carrasco’s jaw-dropping debut is powered by Alma Rosales, a runaway steam engine of a woman: fast, ferocious, and barreling heedlessly toward her destination. Carrasco writes with stunning verve and fierce intelligence, and The Best Bad Things will keep you guessing until its explosive end.” —Carrie Callaghan, author of A Light of Her Own

“A brazen, brawny, sexy standout of a historical thrill ride, The Best Bad Things is full of unforgettable characters and insatiable appetites. I was riveted. Painstakingly researched and pulsing with adrenaline, Carrasco’s debut will leave you thirsty for more.” —Lyndsay Faye, author of The Gods of Gotham

"Gritty street fiction set in the lawless past when Port Townsend was the Deadwood of the Pacific Northwest, Katrina Carrasco's The Best Bad Things is a bloody brawl of a book. Carrasco uses a whippy structure and flexible prose to play an unsettling shell game as Alma, dressed as Jack, sheds her impulse control along with her corsets, and the plot accelerates into a visceral, unexpected underworld of bare-knuckle fighting, opium smuggling, and genderqueer lust." —Nicola Griffith, author of So Lucky

“HOLY SHIT! I nearly chipped a tooth on the opening paragraph of this book and choked to death. Katrina Carrasco is a powerful writer, her prose as sharp as a Hattori Hanzo sword from Kill Bill, with one badass female protagonist, Alma, a detective who is kicking ass and taking names in a world of power-hungry men and women smuggling opium, trying to stay one step ahead of them while balancing her physical attraction to the ringleader. But be warned, you may need a trip to the dentist after reading this amazing debut!” —Frank Bill, author of Crimes in Southern Indiana, Donnybrook, and The Savage

“A vibrant and compulsive read; in Alma Rosales, Katrina Carrasco has created a gender-bending heroine who is impossible to forget. The Best Bad Things packs a massive punch and succeeds in queering the crime genre.” —Saleem Haddad, author of Guapa