The Golden State: A Novel (Paperback) 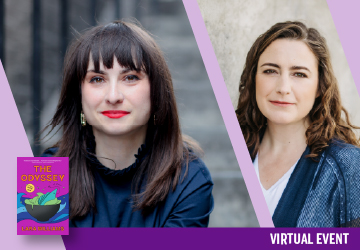 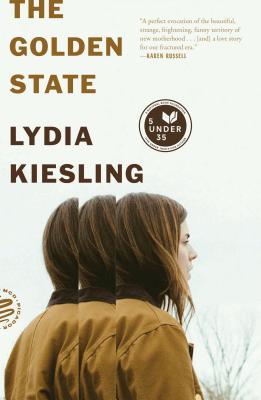 Named one of the Best Books of 2018 by NPR, Bookforum and Bustle. One of Entertainment Weekly's 10 Best Debut Novels of 2018. An Amazon Best Book of the Month and named a fall read by Buzzfeed, Nylon, Entertainment Weekly, Elle, Vanity Fair, Vulture, Refinery29 and Mind Body Green

A gorgeous, raw debut novel about a young woman braving the ups and downs of motherhood in a fractured America

In Lydia Kiesling’s razor-sharp debut novel, The Golden State, we accompany Daphne, a young mother on the edge of a breakdown, as she flees her sensible but strained life in San Francisco for the high desert of Altavista with her toddler, Honey. Bucking under the weight of being a single parent—her Turkish husband is unable to return to the United States because of a “processing error”—Daphne takes refuge in a mobile home left to her by her grandparents in hopes that the quiet will bring clarity.

But clarity proves elusive. Over the next ten days Daphne is anxious, she behaves a little erratically, she drinks too much. She wanders the town looking for anyone and anything to punctuate the long hours alone with the baby. Among others, she meets Cindy, a neighbor who is active in a secessionist movement, and befriends the elderly Alice, who has traveled to Altavista as she approaches the end of her life. When her relationships with these women culminate in a dangerous standoff, Daphne must reconcile her inner narrative with the reality of a deeply divided world.

Keenly observed, bristling with humor, and set against the beauty of a little-known part of California, The Golden State is about class and cultural breakdowns, and desperate attempts to bridge old and new worlds. But more than anything, it is about motherhood: its voracious worry, frequent tedium, and enthralling, wondrous love.

Lydia Kiesling's debut novel, The Golden State, was a finalist for the VCU Cabell First Novelist Prize and longlisted for the Center for Fiction's First Novel Prize. Her essays and criticism have appeared in The New York Times Magazine, The Guardian, The Cut, Slate, and The New Yorker online, and have been recognized in The Best American Essays 2016. In 2018 the was named a 5 Under 35 by the National Book Foundation. Kiesling lives in Portland with her family.

"The Golden State anchors Daphne’s journey in the visceral and material realities of motherhood . . . The novel beautifully depicts the golden light of California, the smell of the fescue grasses, the thinness of the air, and the way that Daphne and Honey often feel overwhelmed by the scale of the spaces they find themselves in. The result is less an untroubled analogy between the landscapes of motherhood and the American West than an invitation to think more deeply about how limited our canonical literary imaginings of each have been." --Sarah Blackwood, The New Yorker

"Kiesling vividly renders the high desert town, its beauty and its starkness, its juniper-scented air and its neglect, the way it both centers and saps Daphne. Kiesling is also an astute cultural commentator, shedding light on our current political divide and university politics and Orientalism and the barbarism of America past and present while shedding light on parts of California often ignored by news and literature. She reminds us that the Golden State is more complexly storied than we often give it credit for; she also reminds us that for all its stretches of tedium and potential for heartbreak, the state of raising a young child can be pretty golden, too." --Gayle Brandeis, San Francisco Chronicle

"Dry, observant, self-aware, smart without being showy . . . Respectfully but unsentimentally, [Lydia Kiesling] articulates the sorts of emotional drama that undergirds life with a small child, giving shape and consequence to the joy, boredom, nostalgia, tenderness, and frustration that parenting constantly provokes . . . An excellent, accomplished, original novel, one of the best I’ve read in a while." --Adelle Waldman, Bookforum

"Gorgeously written, deeply engaging, character-driven . . . It's been a very long time since my daughters were toddlers, but Daphne's trenchant observations of her complicated feelings brought it all back." --Nancy Pearl, NPR (Best Books of 2018)

"Remarkable . . . What Kiesling syntactically accomplishes is an exquisite look at the gulf between the narrow repetitive toil of motherhood and the sprawling intelligence of the mother that makes baby care so maddening . . . We don’t get to enter a golden state without conflict or boredom. But love can persist despite crappy Skype connections, and wonder can flourish in the interstices between tasks." --Heather Abel, Slate

"In heartrending prose, Lydia Kiesling weaves through an exploration of the political and the private, fear and love, survival and obligation, loneliness and longing." --Arianna Rebolini, Buzzfeed (Best Books of Fall 2018)

"a quiet adventure that tackles questions of motherhood, academic pursuits, sexism, and immigration. In a narrative that could have become claustrophobic, Kiesling’s prose feels open and propulsive as Daphne ponders issues that plague all mothers, women, people." --Vanity Fair (This Fall's Best Fiction)

"Motherhood and home are two of the themes with which Lydia Kiesling grapples in The Golden State, a lucid, lyrical look at the often alienating, disorienting experience of early motherhood, the way in which it frays at already unraveling nerves, and the way in which external realities contribute to that fraying, that fuzziness, when the fragility of the world around and within us becomes all too apparent."--Kristen Iversen, NYLON

"Already poised to be one of the great (and greatly inventive) novels about motherhood." --Elena Nicolaou, Refinery29 (The Books of September)

"Kiesling’s intimate, culturally perceptive debut portrays a frazzled mother and a fractious America, both verging on meltdown . . . Kiesling depicts parenting in the digital age with humor and brutal honesty and offers insights into language, academics, and even the United Nations. But perhaps best of all is her thought-provoking portrait of a pioneer community in decline as anger and obsession fray bonds between neighbors, family, and fellow citizens." --Publishers Weekly (starred review)

"First novelist Kiesling nails the particular travails of new mothers, puts a human face on immigration issues, and adds some contemporary political commentary . . . There's so much to love about this novel . . . Strongly recommended for readers who enjoy contemporary literary fiction and can handle a few swear words." --Library Journal (starred review)

"Lydia Kiesling’s first novel encapsulates the intense and often conflicting feelings of early parenthood: frustration, tenderness, isolation. By playing with punctuation and sentence structure, Kiesling immerses the reader in the fragile headspace of the anxious new mother. With a style reminiscent of Claire Vaye Watkins and Sarah Stonich, The Golden State sparks the lovely, lonely feelings inside us all” --Booklist

"Kiesling is a talented author . . . with a unique voice. She’s very smart, very funny, and wonderfully empathetic . . . [A] skilled and promising writer" --Kirkus

“The Golden State is a perfect evocation of the beautiful, strange, frightening, funny territory of new motherhood. Lydia Kiesling writes with great intelligence and candor about the surreal topography of a day with an infant, and toggles skillfully between the landscape of Daphne’s interior and the California desert, her postpartum body and the body politic. A love story for our fractured era.” —Karen Russell, author of Vampires in the Lemon Grove and Swamplandia!

“The Golden State is a rare and important novel not only because it depicts with blazing accuracy the everyday experience of raising a young child but also because it uses the quotidian to reveal larger truths about humanity’s gifts and deficits. In Lydia Kiesling’s remarkable first novel, the familiar and the foreign are not so different after all, and what we remember may not be what is. A profound book.” —Edan Lepucki, author of Woman No. 17 and California

“The Golden State is spectacularly good at rendering maternal obsession and panic. Lydia Kiesling is brilliant on our certainty that for all we feel, we don’t do nearly enough for those we love.” —Jim Shepard, author of The World to Come

“Lydia Kiesling has written a bold, keenly detailed, and distinctively female coming-of-age story about a woman who, having happily stumbled into marriage, motherhood, and a great job, must now rethink everything. Kiesling makes her patch of high-California desert as vivid a character as the secessionist next door. Beautifully, intricately written, true to life and to women’s experience in particular; full of insight and humor and memorable landscapes, The Golden State is a marvelous and captivating literary debut.” —Michelle Huneven, author of Off Course

“A big, rollicking adventure of a novel, overflowing with the kind of intense, fractal consciousness life with small children entails, the world at once collapsed and expanded infinitely, in which whole lifetimes are contained in each and every single day, Lydia Kiesling’s The Golden State is as funny and alive a story as they come.” —Elisa Albert, author of After Birth