A Chain Across the Dawn (The Universe After #2) (CD-Audio) 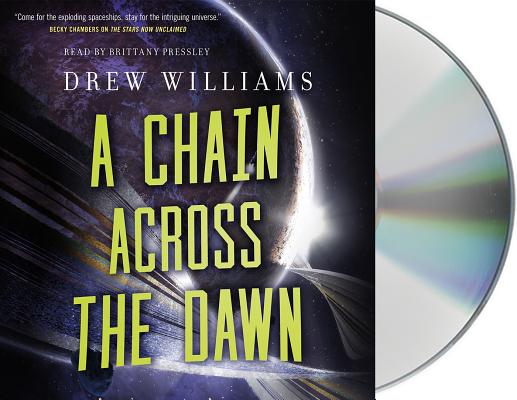 By Drew Williams, Brittany Pressley (Read by)
Unavailable at this time.
Unavailable

This is book number 2 in the The Universe After series.

Drew Williams continues the Universe After series with A Chain Across the Dawn, an epic space opera chase across the galaxy with witty banter, fantastical planets, and a seemingly unbeatable foe.

It’s been three years since Esa left her backwater planet to join the ranks of the Justified. Together, she and fellow agent Jane Kamali have been traveling across the known universe, searching for children who share Esa’s supernatural gifts.

On a visit to a particularly remote planet, they learn that they’re not the only ones searching for gifted children. They find themselves on the tail of a mysterious being with impossible powers who will stop at nothing to get his hands on the very children that Esa and Jane are trying to save.

With their latest recruit in tow—a young Wulf boy named Sho—Esa and Jane must track their strange foe across the galaxy in search of answers. But the more they learn, the clearer it becomes—their enemy may be harder to defeat than they ever could have imagined.

Brittany Pressley is an Audiofile Earphones award winning narrator in NYC. She has recorded over 100 titles and has received several nominations for American Library Association's annual list of Amazing Audiobooks for Young Adults. She is also an accomplished singer/songwriter and voice actress. Her voice can be heard on national and international TV and radio commercials as well as several animated series and video games. She is a proud graduate of Columbia University.

Praise for The Stars Now Unclaimed:

"Come for the exploding spaceships, stay for the intriguing universe."—Becky Chambers, author of The Long Way to a Small, Angry Planet

"I loved it!"—Claire North, author of The First Fifteen Lives of Harry August

"You could read this book for the engrossing worldbuilding or for the fascinating characters, but all I needed was ROBOT PRIEST."—Mur Lafferty, author of Six Wakes

"[An] amazing, kick-ass book"—K.B. Wagers, author of Behind the Throne

"A thrill ride from start to finish."—Catherine Cerveny, author of The Rule of Luck