The Firmament of Flame (The Universe After #3) (Hardcover) 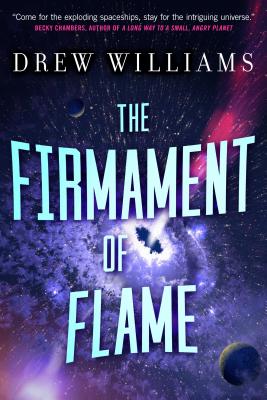 This is book number 3 in the The Universe After series.

For fans of Firefly and James S. A. Corey's Expanse novels, The Firmament of Flame is the third installment in Drew Williams' Universe After series.

For nearly a century, the Justified have been searching for gifted children to help prevent the return of the pulse. Until recently, they thought they were the only ones.

Jane Kamali and her telekinetic protégé Esa, now seventeen, barely managed to claim victory against a Cyn—a being of pure energy—hell bent on hunting down the gifted. Now they face an army.

The Cyn and their followers will stop at nothing to find Esa and the others. No one knows what they want, but Jane, Esa, and their allies in the Justified are determined to find out.

Even if they have to go to the ends of the known universe to do it.

Praise for The Stars Now Unclaimed:

"Come for the exploding spaceships, stay for the intriguing universe."—Becky Chambers, author of The Long Way to a Small, Angry Planet

"I loved it!"—Claire North, author of The First Fifteen Lives of Harry August

"You could read this book for the engrossing worldbuilding or for the fascinating characters, but all I needed was ROBOT PRIEST."—Mur Lafferty, author of Six Wakes

"[An] amazing, kick-ass book"—K.B. Wagers, author of Behind the Throne

"A thrill ride from start to finish."—Catherine Cerveny, author of The Rule of Luck