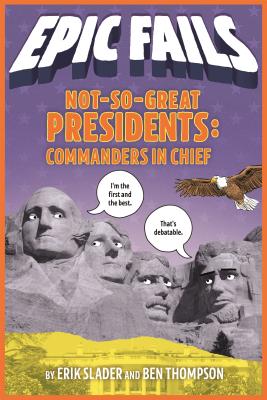 This is book number 3 in the Epic Fails series.

From heroic George Washington to the dastardly Richard Nixon, the oval office has been occupied by larger-than-life personalities since 1789. The position comes with enormous power and responsibility, and every American president thus far has managed to achieve great things. However, the President of the United States is only human—and oftentimes far from perfect. While some men suffered through only minor mishaps during their time in office, others are famously remembered for leaving behind much bigger messes.

In the third installment of the Epic Fails series, authors Erik Slader and Ben Thompson, and artist Tim Foley, take readers on another hilarious ride, exploring the lives, legacies, and failures of some of America’s commanders in chief.

Ben Thompson is the author of a dozen books on various awesome historical subjects including the Guts & Glory series, and has appeared on television programs for the History Channel, Discovery, and the American Heroes Channel. He has written for Cracked, Fangoria, Soldier of Fortune, and The American Mustache Institute, currently owns four swords (if you count a letter opener shaped like Glamdring the Foe-Hammer), and can occasionally beat the Star Wars Trilogy arcade game with a single quarter.

Erik Slader is the creator of “Epik Fails of History” a blog and podcast about the most epic fails… of history.

With Ben Thompson, Erik is the coauthor of the Epic Fails series, including The Wright Brothers: Nose-Diving Into History and Race to Space: Countdown to Liftoff.

Tim Foley was born in Flint, Michigan, and since attending college at the Kendall School of Design, has made his home in Grand Rapids on the west side of the state. A freelance illustrator for the past three decades, his work has appeared in magazines and newspapers around the world and books have included many titles in the bestselling young adult "Who Was" biography series, as well as several adult coloring books. timfoleyillustration.com

Praise for The Wright Brothers: Nose-Diving into History:

"[A] tribute to the spirit of invention." — Booklist

"A fact-filled title sure to boost the confidence of aspiring inventors. . . VERDICT An informative and humorous addition to middle school STEM biography collections." — School Library Journal

"Information-book fans and skeptics alike will want to get in on the ground floor of this promising new series." — The Bulletin of the Center for Children's Books (BCCB)