Into Oblivion: An Icelandic Thriller (An Inspector Erlendur Series #11) (Paperback) 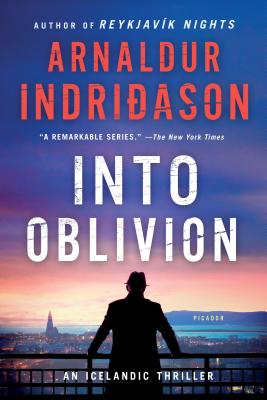 This is book number 11 in the An Inspector Erlendur Series series.

Into Oblivion, the follow-up to the gritty prequel Reykjavik Nights, gives devoted fans another glimpse of Erlendur in his early days as a young, budding detective.

It's 1979. A woman swims in a remote, milky-blue lagoon. Steam rises from the water and as it clears, a body is revealed in the ghostly light. Miles away, a vast aircraft hangar rises behind the perimeter fence of the US military base. A sickening thud is heard as a man's body falls from a high platform.

Many years before, a schoolgirl went missing. The world has forgotten her. But Erlendur has not. Erlendur is a newly promoted detective. He is only starting out, but he is already deeply involved in his work.

The writer whose work The New York Times describes as "having the sweep and consequence of epic storytelling," has outdone himself in this multi-layered and masterful suspense story.

"Indridason is a master at weaving big-picture commentary into taut, realistic police procedurals, and he scores another victory with this examination of the Cold War’s impact in Iceland." --Booklist on Into Oblivion

“What's Icelandic for ‘we have ourselves a winner?” —Newsday

“Puts Iceland on the map as a major destination for enthusiasts of Nordic crime fiction.” —Marilyn Stasio, The New York Times Book Review

“Indridason and Stieg Larsson have produced two of the best crime novels of the year.” —The Independent (UK)

“Every one of these writers is good [Hakan Nesser, Kjell Eriksson, Karin Fossum], but in my book, Arnaldur Indridason is even better.” —Joe Queenan, Los Angeles Times

“Fans of old-school sleuthing and new-school crime thrillers alike will relish this terrific read with its modern heroine but old-fashioned, meticulous approach.” —Library Journal on Outrage