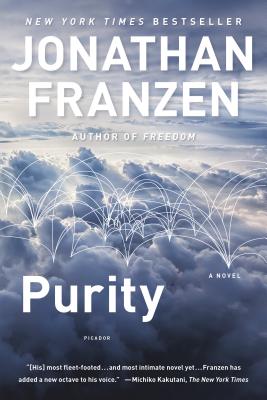 By Jonathan Franzen
$17.00
Unavailable at this time.

This was my first experience reading a Franzen novel and I thoroughly enjoyed it, ripping through this fast-paced 600 page novel. Reading this book sooner than later is a must due to its topical placement in the world of Julian Assange and Edward Snowden-type figures in current global politics. It's not hard to keep track of the slew of characters as each one of them is written so memorably.

“So funny, so sage and above all so incandescently intelligent” (The Chicago Tribune), the New York Times bestseller Purity is a grand story of youthful idealism, extreme fidelity, and murder, a daring and penetrating book from “the most intelligent novelist of [his] generation” (The New Republic), Jonathan Franzen

Young Pip Tyler doesn’t know who she is. She knows that her real name is Purity, that she’s saddled with $130,000 in student debt, that she’s squatting with anarchists in Oakland, and that her relationship with her mother—her only family—is hazardous. But she doesn’t have a clue who her father is, why her mother chose to live as a recluse with an invented name, or how she’ll ever have a normal life.

A glancing encounter with a German peace activist leads Pip to an internship in South America with the Sunlight Project, an organization that traffics in all the secrets of the world—including, Pip hopes, the secret of her origins. TSP is the brainchild of Andreas Wolf, a charismatic provocateur. Now on the lam in Bolivia, Andreas is drawn to Pip for reasons she doesn’t understand, and she is equally conflicted about her attraction to him.

The author of The Corrections and Freedom has imagined a world of vividly original characters, and he follows their intertwining paths through landscapes as contemporary as the omnipresent Internet and as ancient as the war between the sexes.

Jonathan Franzen is the author of five novels, including The Corrections, Freedom, and Crossroads, and five works of nonfiction, most recently Farther Away and The End of the End of the Earth, all published by Farrar, Straus and Giroux. He lives in Santa Cruz, California.

“Franzen may well now be the best American novelist. He has certainly become our most public one, not because he commands Oprah's interest and is a sovereign presence on the best-seller list-though neither should be discounted-but because, like the great novelists of the past, he convinces us that his vision unmasks the world in which we actually live . . . A good writer will make an effort to purge his prose of clichés." —Sam Tanenhaus, The New Republic

“Mr. Franzen's most fleet-footed, least self-conscious and most intimate novel yet . . . The stories of the characters in Purity zip forward aggressively in time, but open inward, burrowing into their psyches and underscoring what seems like Mr. Franzen's determination to build on the steps he took in Freedom to create people capable of change, perhaps even transcendence . . . Mr. Franzen adroitly dovetails these story lines, using large dollops of Dickensian coincidence and multiple plot twists to construct suspense and to entertain.” —Michiko Kakutani, The New York Times

“Franzen's prose is alive with intelligence . . . the ride is exhilarating.” —Caleb Crain, The Atlantic

“Purity comes five years after Freedom and 14 years after The Corrections. Both earlier novels were called masterpieces of American fiction; to say the same of Purity might be true but misses the point. Magisterial sweep is now just what Franzen does, and his new novel appears . . . as a simple, enjoyable reminder of his sharp-eyed presence.” —Radhika Jones, Time

“[Purity is] so funny, so sage and above all so incandescently intelligent, there's never a moment you wish you were reading something else. Franzen still seems on every page of this book like America's most significant working novelist.” —Charles Finch, The Chicago Tribune

“Purity's plot is a beautiful arabesque . . Subplots are doubled and trebled. But the remarkable thing is that the novel does not seem convoluted when you're reading it; to an astonishing degree, the melodramatic swoops of the plot are well orchestrated and thrilling.” —Elaine Blair, Harper's

“[Purity displays] fierce writing, and it does what fiction is supposed to, forcing us to peel back the surfaces, to see how love can turn to desolation, how we are betrayed by what we believe. It is the most human of dilemmas, with which we all must come to terms . . . It remains compelling to read Franzen confront his demons, which are not just his but everyone's.” —David L. Ulin, Los Angeles Times

“Probably no one alive is a better novelist than Jonathan Franzen . . . Purity is masterfully crafted, plangently insightful, a testament to the continued power of the realist tradition to address the complexities of modern life.” —Brian Phillips, Grantland

“Purity demonstrates Franzen's ingenious plotting, his ability to steer the chaos of real life toward moments that feel utterly surprising yet inevitable . . . In Purity Franzen writes with a perfectly balanced fluency . . . From its tossed-off observations . . . to its thoughtful reflections on the moral compromises of journalism,Purity offers a constantly provocative series of insights.” —Ron Charles, The Washington Post

“As in all Franzen's novels, and now so very powerfully in Purity, it is the history of his players that matters. Franzen's exhaustive exploration of their motives, charted oftentimes over decades so as to deliver us to this moment when the plot turns on the past in the seemingly smallest of ways, is what makes him such a fine writer, and his books important. He is a fastidious portrait artist and an epic muralist at once.” —Bret Lott,The Boston Globe

“Not to be missed.” —Jocelyn McClurg, USA Today

“Purity is a novel of plenitude and panorama . . . [Its sprawl] can suggest a sort of openness and can have a strange, insistent way of pulling us in, holding our attention . . . Often brilliantly funny . . . This is a novel of secrets, manipulations and lies.” —Colm Toibin, The New York Times Book Review

“As with all of Franzen's fiction, there is much to admire in Purity, not least what reviewer David Gates once termed 'microfelicities,' the expertly calibrated turns of phrase and pleasingly digressive cultural references and riffs around every corner. Like his last two novels, Purity bends time, easing in and out of characters' pasts and presents until, before you know it, the disparate pieces of a life suddenly fit.” —Leigh Haber, O Magazine

“[Franzen] knows exactly what we've come to expect from him, yet with Purity, imperfect and impolite but, yes, ambitious and vital, he proves us all wrong.” —Richard Dorment, Esquire

“Purity is the best book the prodigiously talented novelist has written—funnier, looser, with more care for his characters . . . Purity offers the sense of ease of a virtuoso giving every appearance of enjoying himself.” —Yvonne Zipp, The Christian Science Monitor

“Franzen reveals moments of absolute genius. The cathartic power of tennis; the debilitating effects of jealousy; the fickle, fleeting nature of fame; and the slow death of youthful idealism are all beautifully captured.” —Sally Bissell, Library Journal

“Franzen has created a spectacularly engrossing and provocative twenty-first-century improvisation on Charles Dickens' masterpiece, Great Expectations . . . Purity will be one of the most talked about books of the season.” —Donna Seaman, Booklist