The Trouble in Me (Paperback) 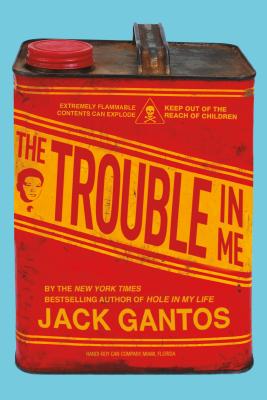 By Jack Gantos
$11.99
Unavailable at this time.

This fiery autobiographical novel captures a pivotal week or two in the life of fourteen-year-old Jack Gantos, when he began to slide off track as a kid who in just a few years would find himself locked up in a federal penitentiary for the crimes portrayed in the memoir Hole in My Life. Set in Fort Lauderdale, The Trouble in Me opens with an explosive encounter in which Jack first meets his awesomely rebellious older neighbor, Gary Pagoda, just back from juvie for car theft. Instantly mesmerized, Jack decides he will do whatever it takes to be like Gary. As a follower, Jack is eager to leave his old self behind and desperate for whatever crazy, hilarious, frightening thing might happen next. But he may not be as ready as he thinks when the trouble in him comes blazing to life.

The Trouble in Me by Jack Gantos is a brutally honest memoir that is dark, funny, and most of all, true-to-life.

Jack Gantos has written books for people of all ages, from picture books and middle-grade fiction to novels for young adults and adults. His works include Hole in My Life, a memoir that won the Michael L. Printz and Robert F. Sibert Honors, Joey Pigza Swallowed the Key, a National Book Award Finalist, and Joey Pigza Loses Control, a Newbery Honor book. Jack was born in Mount Pleasant, Pennsylvania, and when he was seven, his family moved to Barbados. He attended British schools, where there was much emphasis on reading and writing, and teachers made learning a lot of fun. When the family moved to south Florida, he found his new classmates uninterested in their studies, and his teachers spent most of their time disciplining students. Jack retreated to an abandoned bookmobile (three flat tires and empty of books) parked out behind the sandy ball field, and read for most of the day. The seeds for Jack’s writing career were planted in sixth grade, when he read his sister’s diary and decided he could write better than she could. He begged his mother for a diary and began to collect anecdotes he overheard at school, mostly from standing outside the teachers’ lounge and listening to their lunchtime conversations. Later, he incorporated many of these anecdotes into stories.  While in college, he and an illustrator friend, Nicole Rubel, began working on picture books. After a series of well-deserved rejections, they published their first book, Rotten Ralph, in 1976. It was a success and the beginning of Jack’s career as a professional writer. Jack continued to write children’s books and began to teach courses in children’s book writing and children’s literature. He developed the master’s degree program in children’s book writing at Emerson College and the Vermont College M.F.A. program for children’s book writers. He now devotes his time to writing books and educational speaking. He lives with his family in Boston, Massachusetts.

The Trouble In Me:
A School Library Journal Best Book of 2015

“Eloquent, unflinching and darkly funny, The Trouble in Me chronicles a boy's initiation into manhood—one warped version of it, anyway.” —Chicago Tribune

“The book has an unsettling power ... A gutsy ... cautionary romp.” —The New York Times Book Review

“[An] incendiary fictionalized memoir ... Abundant style and substance makes this an irresistible cautionary tale ... Gantos has won a Newbery Medal, Printz Honor, Sibert Honor, and countless hearts. Readers will want to know how he became one of a kind.” —Booklist, starred review

“Gantos’s characteristic humor and keen observation of the fragile teen psyche combine with heartbreaking authenticity in this unflinching look at how a good kid can easily go down a wrong path ... Hand this to the so-called “bad” kids, the lost kids, and the ones struggling to find their way.” —School Library Journal, starred review

“Readers will laugh ... at Jack's reckless antics and lack of impulse control, but they will probably also sympathize with his deep itch to make a change.” —Kirkus Reviews