The Man Who Would Be Sherlock: The Real-Life Adventures of Arthur Conan Doyle (Hardcover) 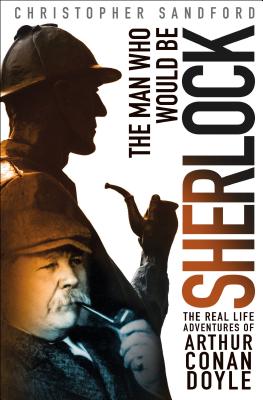 By Christopher Sandford
$28.99
On our shelves now:

A world-famous biographer reveals the strange relationship between Sir Arthur Conan Doyle's real life and that of Sherlock Holmes in the engrossing The Man Who Would Be Sherlock.

Though best known for the fictional cases of his creation Sherlock Holmes, Conan Doyle was involved in dozens of real life cases, solving many, and zealously campaigning for justice in all. Stanford thoroughly and convincingly makes the case that the details of the many events Doyle was involved in, and caricatures of those involved, would provide Conan Doyle the fodder for many of the adventures of the violin-playing detective.

There can be few (if any) literary creations who have found such a consistent yet evolving independent life as Holmes. He is a paradigm that can be endlessly changed yet always maintains an underlying consistent identity, both drug addict and perfect example of the analytic mind, and as Christopher Sandford demonstrates so clearly, in many of these respects he mirrors his creator.

Christopher Sandford has published acclaimed biographies of Kurt Cobain, Mick Jagger, Paul McCartney, Imran Khan, Harold Macmillan, John F. Kennedy, Steve McQueen, and Roman Polanski. He is also the author of Masters of Mystery: The Strange Friendship of Arthur Conan Doyle and Harry Houdini. He has worked as a film and music writer and reviewer for over 20 years, and frequently contributes to newspapers and magazines on both sides of the Atlantic. Rolling Stone has called him "the pre-eminent author in his field today." Sandford divides his time between Seattle and London.

"Veteran celebrity biographer Sandford brings together two fierce yet mutually respectful antagonists on the subject of spiritualism…A fascinating account of an unlikely relationship."—Kirkus Reviews, on Masters of Mystery

"Rivetingly chronicles the eternal persistence of humbug, chicanery and that inextinguishable human trait we call 'hope.'"—Arthur Magida, author of The Nazi Séance on Masters of Mystery

"A must read… a fascinating insight into Houdini's daily life and his unique relationship with Sir Arthur Conan Doyle… provided a great amount of new relevant historical facts and details that have been heretofore hidden from Houdini followers… Sandford's reverse engineering of Houdini's thought process makes the reader feel they are in the company of the Houdini and his contemporaries… I couldn't put the book down." —Geno Munari, President, Houdini Picture Corporation, Houdini, Houdini Magic on Masters of Mystery

"Absorbing and prodigiously researched… Houdini's and Conan Doyle's life stories, together and separately, have been told before, but Masters of Mystery is a worthy addition to the long shelf of existing work about these remarkable men."—Seattle Times

"In this fine biography, Sandford gives [Polanski's] films the praise they deserve, and he is fair as well to Polanski the man."—Jonathan Yardley, Washington Post Book World