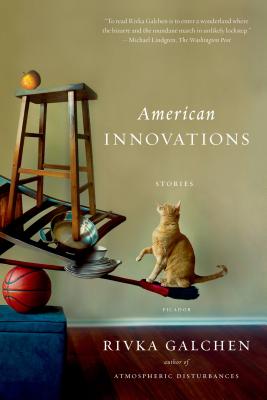 These stories exquisitely balance the cerebral and the emotional as well as the scientific and the fantastic. Like stories from the great masters, those in this book inform, illuminate, and enrich one another. They are stories that reward through multiple readings. Galchen is easily one of my favorite new writers.

In one of the intensely imaginative stories in Rivka Galchen's American Innovations, a young woman's furniture walks out on her. In another, the narrator feels compelled to promise to deliver a takeout order that has incorrectly been phoned in to her. In a third, the petty details of a property transaction illuminate the complicated pains and loves of a family.
The tales in this groundbreaking collection are secretly in conversation with canonical stories, reimagined from the perspective of female characters. Just as Wallace Stevens's "Anecdote of the Jar" responds to John Keats's "Ode on a Grecian Urn," Galchen's "The Lost Order" covertly recapitulates James Thurber's "The Secret Life of Walter Mitty," while "The Region of Unlikeness" is a smoky and playful mirror to Jorge Luis Borges's "The Aleph." The title story, "American Innovations," revisits Nikolai Gogol's "The Nose."
By turns realistic, fantastical, witty, and lyrical, these marvelously uneasy stories are deeply emotional and written in exuberant, pitch-perfect prose. Whether exploring the tensions in a mother-daughter relationship or the finer points of time travel, Galchen is a writer like none other today.

"[A] witty, winning collection...The DNA in these stories may be old, but Galchen has uncovered a new register and a new space for the domestic and the fantastic to meet. There might be no better model for looking to the past in order to move forward." —The New York Times (The New Vanguard: Remarkable Books by Women That Are Changing the Way We Read and Write Fiction in the 21st Century)

“To read Rivka Galchen is to enter a wonderland where the bizarre and the mundane march in unlikely lockstep.” —Michael Lindgren, The Washington Post