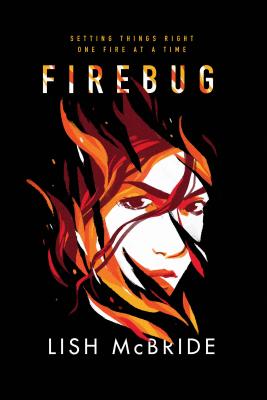 By Lish McBride
$9.99
Unavailable at this time.

This is book number 1 in the Firebug series.

You've done it again, McBride. I thought I'd reached my snarky/irreverent/cleverly-modified-to-meet-my-bizarre-tastes magical creature quota after your second book, BUT NO! You had this hidden up your sleeve just waiting to distract me from daily responsibilities...

Ava is a firebug-she can start fires with her mind. Which would all be well and good if she weren't caught in a deadly contract with the Coterie, a magical mafia. She's one of their main hit men . . . and she doesn't like it one bit. Not least because her mother's death was ordered by Venus-who is now her boss.

When Venus asks Ava to kill a family friend, Ava rebels. She knows very well that you can't say no to the Coterie and expect to get away with it, though, so she and her friends hit the road, trying desperately to think of a way out of the mess they find themselves in. Preferably keeping the murder to a minimum.

Firebug by Lish McBride is an irresistible YA novel that blends a heady, supernatural twist into a modern gang story with a distinctive bite of snarky humor.

Lish McBride grew up in the Pacific Northwest. It rains a lot there, but she likes it anyway. She spent three years away while she got her MFA in fiction from the University of New Orleans, where she managed to survive the hurricane. She enjoys reading, having geek-laden conversations about movies, comics, and zombies with her friends, and of course trying to wear pajamas as much as humanly possible. She lives happily in Mountlake, WA, with her family, two cats, and one very put-upon Chihuahua. Her debut novel, Hold Me Closer, Necromancer was named an American Library Association Best Book for Young Adults and was a finalist for the YALSA William C. Morris Award.

“Ava is intriguing, and though her fiery methodology is dramatic, most teens will be familiar with many of the inner demons she battles.” —Bulletin of the Center for Children's Books

“The angst-filled romantic tension between Ava and Lock, supportive friendships, and fast-paced action sequences will keep readers engrossed. This excellent book is a must-have for all libraries, especially where horror, romance, and urban fantasy fiction are hot.” —VOYA

“The first in what promises to be another popular series, McBride draws upon her talent of spinning entertaining and suspenseful tales that are fresh, fun, and very droll.” —Booklist

“McBride's follow-up to the popular Hold Me Closer Necromancer series maintains her trademark dark humor and engaging, quippy characters. The book exists in the same universe, and possesses the same feeling of incredibly high stakes from the beginning.” —School Library Journal

“Deeply enmeshed with a magical world and its impossible choices before readers ever meet her, Ava and her wholly believable despair are a refreshing change from the endless parade of naive heroines found elsewhere.” —Kirkus Reviews, starred review