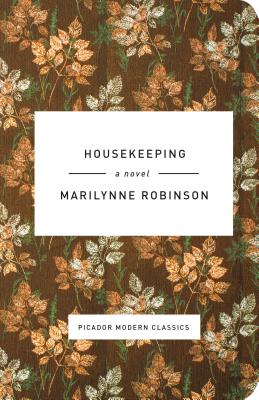 By Marilynne Robinson
$16.00
Out of stock, usually available in 1-5 days

Everything that should need to be said about Marilynne Robinson's Housekeeping has already been said more eloquently in other places. But let me say again, if there exists a certain group of books that one must feel compelled to read, Housekeeping is among those books. Especially here, especially now. While being the story of a transient family in Northern Idaho, Housekeeping also very much feels like a cultural history of the Inland Northwest. Its release in this beautiful pocket edition only makes it more enticing.

"Bought together or separately, these fiction titles are ideal stocking stuffers for the literature lover." - USA Today

Housekeeping is the story of Ruth and her younger sister, Lucille, who grow up haphazardly, first under the care of their competent grandmother, then of two comically bumbling great-aunts, and finally of Sylvie, the eccentric and remote sister of their dead mother. The family house is in the small town of Fingerbone on a glacial lake in the Far West, the same lake where their grandfather died in a spectacular train wreck and their mother drove off a cliff to her death. It is a town "chastened by an outsized landscape and extravagant weather, and chastened again by an awareness that the whole of human history had occurred elsewhere." Ruth and Lucille's struggle toward adulthood beautifully illuminates the price of loss and survival, and the dangerous and deep undertow of transience.

For more than twenty years, Picador has been producing beautifully packaged literary fiction and nonfiction books from Manhattan's Flatiron Building. Our Twentieth Anniversary Modern Classics line pairs iconic books - The Virgin Suicides by Jeffrey Eugenides, Steppenwolf by Herman Hesse, Jesus' Son by Denis Johnson, and Housekeeping by Marilynne Robinson - with a design that's both small enough to fit in your pocket and unique enough to stand out on your bookshelf.

Marilynne Robinson is the recipient of a 2012 National Humanities Medal, awarded by President Barack Obama, for "her grace and intelligence in writing." She is the author of Gilead, winner of the 2005 Pulitzer Prize for Fiction and the National Book Critics Circle Award; Home, winner of the Orange Prize and the Los Angeles Times Book Prize; and Lila, winner of the National Book Critics Circle Award. Her first novel, Housekeeping, won the Hemingway Foundation/PEN Award. Robinson's nonfiction books include The Givenness of Things, When I Was a Child I Read Books, Absence of Mind, The Death of Adam, and Mother Country. She lives in Iowa City, Iowa.

“So precise, so distilled, so beautiful that one doesn't want to miss any pleasure it might yield.” —The New York Times Book Review

"These tiny little titles are pocket-sized, shiny, and gorgeous. Featuring authors like Marilynne Robinson and Jeffery Eugenides, they're the kind of books you'll have to own the entire set of, because they're just that pretty — and it happens to be lovely that they fit in just about every bag you own. You can't be caught anywhere without a book, of course." — Julia Seales, Bustle

"Our books today are the neatest little things you’ll see in the rest of 2015’s book-year: a set of Modern Classics from Picador Press, done up in a neat bow!" — Open Letters Monthly