The Shock of the Fall: A Novel (Paperback) 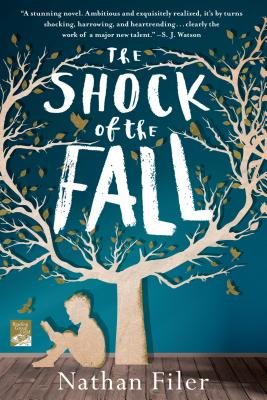 “This wholly original novel was previously published in hardcover under the title Where the Moon Isn't and languished undiscovered, but now it has a Costa Book Award and the attention of many booksellers, and rightly so. Matthew is a young man with mental health issues and this story documents his struggle to come to terms with the death of his brother. The honesty in the telling is what is so compelling about this book, and I came away with a better understanding of how these issues impact a family's path, sometimes in heartbreaking ways.”
— Jenny Lyons, The Vermont Book Shop, Middlebury, VT

***This book has also been published as Where the Moon Isn't.***
Winner of the 2013 Costa First Novel Award

"A stunning novel. Ambitious and exquisitely realized . . . clearly the work of a major new talent." —S. J. Watson, New York Times bestselling author of Before I Go to Sleep

While on vacation with their parents, Matthew Homes and his older brother sneak out in the middle of the night. Only Matthew comes home safely. Ten years later, Matthew tells us, he has found a way to bring his brother back...

What begins as the story of a lost boy turns into a story of a brave man yearning to understand what happened that night, in the years since, and to his very person. Unafraid to look at the shadows of our hearts, Nathan Filer's rare and brilliant debut The Shock of the Fall shows us the strength that is rooted in resilience and love.

NATHAN FILER is a writer and a mental health nurse. He has worked as a researcher at the academic unit of psychiatry at the University of Bristol and on in-patient psychiatric wards. Filer graduated from the prestigious Bath Spa University creative writing program with an MA in 2011, and The Shock of the Fall is his first novel. He lives with his family in Bristol. Nathan won the 2013 Costa Award for The Shock of the Fall (previously published in the U.S. as Where the Moon Isn't).

“WHERE THE MOON ISN'T is a stunning novel. Ambitious and exquisitely realized, it's by turns shocking, harrowing and heartrending. The writing is so accomplished it's hard to believe it's a debut -- it's clearly the work of a major new talent.” —S.J. Watson, New York Times bestselling author of Before I Go to Sleep

“A page-turner, tender and tragic, told in a vulnerable voice that steps in and out of madness. Vivid and haunting, I keep replaying this story in my mind, reliving it, long after having read the final page.” —Lisa Genova, New York Times bestselling author of Still Alice and Love Anthony

“I have become an evangelist for Where the Moon Isn't. It won me heart and soul with it's crazy, wild, fine voice, its bravura, its ambition, its harrowing corners, and the dense rich tiny core of love at its glowing, radiant center. In Matthew's admittedly hard world, the tiniest kindnesses echo and amplify, returning to him larger and louder, until they each become glorious---huge bursts of such grace and truth that more than once, I had to stop reading and weep at the sheer hope-soaked beauty of it. I loved this book cover to cover and word by word; I want to give it to everyone I care for, and I want to keep it for myself to reread over and over. You will, too.” —Joshilyn Jackson, New York Times bestselling author of A Grown-Up Kind of Pretty

“In the ruins of a family exploded by grief, a brilliant madman wrestles a narrative from his disintegrated life. What emerges is both quietly horrifying and surprisingly beautiful: a portrait of family love. Unsentimental, frank, and strange, Filer's narrator is the most likable nut since Kesey's ‘Chief.' He's funny and sad and mad, and he brought me through smiles to tears and back. What moved me the most however was not the tragedy at the story's center, but the sketches Filer draws around the edges: the mother losing her grip from holding too tight, the father stalwartly supporting his sons, the girl who stands up for what she has lost. Memories can destroy or redeem you, depending on how you recreate them. Who better to teach this lesson than a lunatic? I can't stop talking about this book. Looking for a fantastic read, a few laughs and a good cry? You've found it. Where The Moon Isn't is a fresh smart book with a big daft heart.” —Lydia Netzer, author of Shine Shine Shine

“A unique new voice, that in its humour, stark honesty and intriguing mix of bitterness and humanity will touch the hearts of every reader. A haunting, beautiful, unputdownable debut.” —Abigail Tarttelin, author of Golden Boy

“Nathan Filer has done something special. It's rare that an author offers such an authentic and unflinching view into the mind of a character; Matthew Homes is as fully realized a protagonist as I have ever encountered. It won't take long for readers to fall in love.” —Matthew Dicks, author of Memoirs of an Imaginary Friend

“A heartfelt story of a family learning to pick up the pieces in the wake of tragedy . . . the voice always felt real and authentic. I ached for Matthew and his family and was thoroughly captivated by their story.
” —Real Simple

“Skillfully done books transcend age categories. This helps explain the success of such books as 'The Fault in Our Stars' and 'The Perks of Being a Wallflower,' and the endurance of 'The Catcher in the Rye.' 'Where the Moon Isn't' is indeed skillfully done, with drama enough to lure teen readers and sophistication enough to keep adults entranced.” —Cleveland Plain Dealer

“The story Filer tells is deeply affecting and insightful in its account of mental illness. And Matthew is a character the reader won't soon forget.” —Booklist

“A startlingly authentic portrayal of the rigors and tribulations of navigating the modern health care landscape while struggling with mental illness . . . works on many levels - as family drama, as a searing indictment of Western health care and as a confession. A haunting story about how to mourn when the source of your grief will never go away.” —Kirkus

“In this very assured debut, performance poet and mental-health nurse Filer shows that he knows what he's writing about. It should prove catnip to book group participants (especially those who loved Mark Haddon's The Curious Incident of the Dog in the Night-Time) and will appeal to anyone looking for a serious (but not ponderous) story that's impossible to put down. Readers might even end up seeing some similarities between their lives and the 'cut and paste kind of life' Matthew lives as a 'service user' in a National Health Service facility.” —Library Journal, starred review

“A meditation on mental illness, a family drama and mystery, a coming-of-age story - all wrapped up in a caring, imaginative story about a boy and his brother.” —Shelf Awareness, starred review

“This is a tale told beautifully in the innocent voice of a perennial child and misfit . . . Filer deftly paints a series of vignettes of Matthew's chaotic search for solace that successively unveils the mysteries surrounding his brother.” —Washington Independent Review of Books