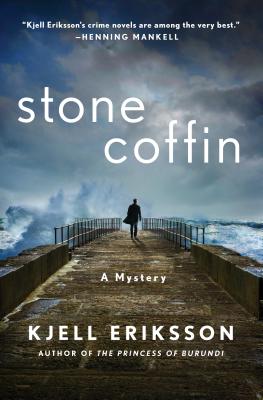 By Kjell Eriksson, Ebba Segerberg (Translated by)
$25.99
Unavailable at this time.

This is book number 7 in the Ann Lindell Mysteries series.

One sunny summer morning a young woman and her six-year old daughter are run over by a car. Both are killed immediately. Is it an accident, or did someone kill them on purpose?

The same morning the husband of the deceased young woman disappears. During the police investigation, it turns out that the husband had recently bought a property that nobody knew anything about. A few days later a macabre discovery is made in a forest nearby.

Eriksson has been nominated for the Best Swedish Crime Novel many times, including for Stone Coffin—the seventh novel in his critically-acclaimed and internationally-loved Ann Lindell series.

"Stone Coffin is a police procedural that refuses to wrap everything up neatly in a simple, happy ending. It remains true-to-life, believable, and troubling to the last word."—Mystery Scene

“An outstanding series...riveting in tone and spirit . . . resembles the books of Maj Sjowall and Per Wahloo, not to mention those of the modern master Henning Mankell.” —Wall Street Journal

“With Kjell Eriksson, what we find is an extraordinary depth of feeling for honest people caught up in serious crime. Eriksson shows how crime undermines the foundations of both family and community.” —The New York Times Book Review

“Eriksson adds each piece of his complex murder puzzle to the picture with masterly control…” —Kirkus Reviews on Black Lies, Red Blood

"A must for the growing contingent of Swedish crime-fiction devotees." —Booklist on The Demon of Dakar

"A challenging and rewarding mystery." —Kirkus Reviews on The Hand that Trembles

"Eriksson's plot is ingenious without being improbable, and his narrative manages to be exhilaratingly propulsive and rich in convincing psychological insight and engrossing details." —Los Angeles Times on The Princess of Burundi