The Great Gatsby (Cambridge Edition of the Works of F. Scott Fitzgerald) (Hardcover) 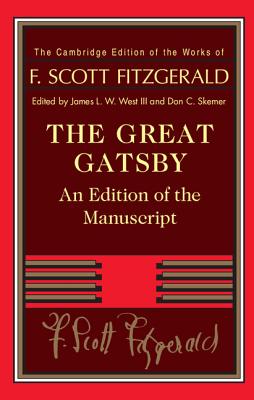 This edition presents the manuscript of F. Scott Fitzgerald's The Great Gatsby, the earliest full version of the novel that survives. Study of this manuscript reveals much about the composition of the novel - about the development of its characters and themes and the revision of its language. Fitzgerald reworked the manuscript, putting it through several drafts and continuing to edit until a few weeks before publication. The period of its creation was an amalgamation of his talent, inspiration, and self-discipline which resulted in a masterpiece. An introduction by James L. W. West, III, the general editor of the series, gives the compositional history of the novel; a bibliographical commentary by Don C. Skemer, Curator of Manuscripts at Princeton University Library, describes the manuscript and gives the story of its preservation, acquisition, and restoration. The reading text is presented without emendation and with a minimum of editorial apparatus. This edition will allow critics, teachers, and students to study The Great Gatsby as a fluid text, evolving and progressing toward its final form from its very earliest incarnation.