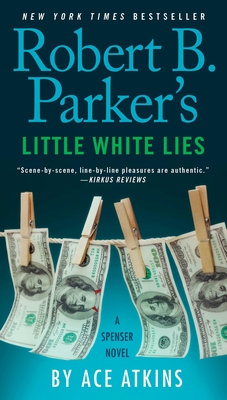 This is book number 46 in the Spenser series.

Boston PI Spenser and right hand Hawk follow a con man's trail of smoke and mirrors in this thrilling entry in Robert B. Parker's long-running series.

Connie Kelly thought she'd found her perfect man on an online dating site. She fell so hard for handsome, mysterious M. Brooks Welles that she wrote him a check for almost three hundred thousand dollars, hoping for a big return on her investment. But within weeks, both Welles and her money are gone. Her therapist, Dr. Susan Silverman, hands her Spenser's card...

A self-proclaimed military hotshot, Welles had been a frequent guest on national news shows speaking with authority about politics and world events. When he disappears, he leaves not only a jilted lover but a growing list of angry investors, duped cops, and a team of paramilitary contractors looking for revenge.

Enter Spenser, who quickly discovers that Welles' name, résumé, and client list are nothing but an elaborate fraud. As he follows the mystery man's trail from Boston to backroads Georgia, Spenser will need help from trusted allies Hawk and Teddy Sapp to make sure Welles's next con is his last.

Robert B. Parker was the author of seventy books, including the legendary Spenser detective series, the novels featuring police chief Jesse Stone, and the acclaimed Virgil Cole-Everett Hitch westerns, as well as the Sunny Randall novels. Winner of the Mystery Writers of America Grand Master Award and long considered the undisputed dean of American crime fiction, he died in January 2010.

Ace Atkins iis the New York Times bestselling author of the Quinn Colson novels, the first two of which--The Ranger and The Lost Ones--were nominated for the Edgar Award for Best Novel (he also has a third Edgar nomination for his short story, "Last Fair Deal Gone Down"). In addition, he is the author of several New York Times bestselling novels in the continuation of Robert B. Parker's Spenser series. Before turning to fiction, he was a correspondent for the St. Petersburg Times, a crime reporter for the Tampa Tribune, and, in college, played defensive end for the undefeated Auburn University football team (for which he was featured on the cover of Sports Illustrated). He lives in Oxford, Mississippi.

“Atkins, a longtime Spenser fan, understands the character and what makes him tick. He knows Spenser’s world and the people who inhabit it. He writes with the same spare style as Parker and peppers the narrative with the same wry wit.”—Fort Worth Star Telegram

“Atkins really hit his stride as steward for Parker’s characters.”—Booklist

“Atkins does a wonderful job with the characters created by Parker.”—Booklist

“Atkins has done a splendid job of capturing the voice of the late Robert B. Parker.”—Publishers Weekly