Time's a Thief: A Novel (Paperback) 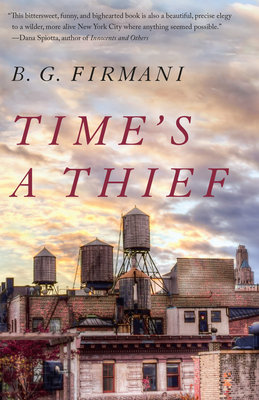 Capturing New York during its Giuliani inflection point, beautifully juxtaposing the atmosphere and protagonist to illuminate the character's evolution out of adolescence. The book's clarity, humor and energy are all so distinctly of that time and perfectly rendered that its effect for any reader who lived in New York City as it teetered at the precipice of becoming a capitalist amusement park will be left viscerally shaken.

It’s the mid-1980s in gritty, vibrant New York City when Francesca “Chess” Varani strikes up a volatile friendship with drama-queen classmate Kendra Marr-Löwenstein. Drawn into the orbit of Kendra’s Salingeresque family, Chess moves into their Greenwich Village home when she graduates from Barnard and takes a job assisting the infamous literary intellectual Clarice Marr. There she receives the sentimental education and emotional roughing up New York bestows on all its young hopefuls—including a doomed love affair with Clarice’s troubled son.

Narrating her story twenty years on, from the winter of the 2008 financial crisis, a sadder but wiser Chess evokes her youth with all the poignancy of time passing—and all the weight of choices made and not made.

B. G. Firmani is a graduate of Barnard College and holds an MFA from Brown. Her short fiction has been published in BOMB Magazine, The Kenyon Review, and Bellevue Literary Review. She is the recipient of a New York Foundation for the Arts fellowship and has been a resident at the MacDowell Colony and Yaddo. She lives in New York City.

“Time’s a Thief is a terrific coming-of-age novel: B.G. Firmani perfectly captures the innocent longing and more complicated striving of a young person on the cusp of her adulthood.  This bittersweet, funny, and bighearted book is also a beautiful, precise elegy to a wilder, more alive New York City where anything seemed possible.”
— Dana Spiotta, author of Stone Arabia and Eat the Document

“B.G. Firmani's witty, intimate, and knowing voice is captivating, and will keep readers up way past their bedtime, as it did me, just to stay under its spell.  Time's a Thief tells the ageless story of a young woman who comes to New York City to be schooled, awakened, emotionally bruised, and heartbroken, until she grows wise enough to put the shambles of her life back together. It's a pleasure to accompany this heroine on her journey.”
— Lynne Sharon Schwartz, author of Rough Strife and Disturbances in the Field

"Firmani really captures the grit and promise of 1980s New York, with too many cigarettes and dingy punk shows, when it was both unusual and magical for kids to come...for school... A leisurely exploration of character and place that, when you connect to Chess, packs a wallop."
—Booklist

“Chess is an engaging character... funny and cool... Like last year’s Sweetbitter by Stephanie Danler, it is the coming-of-age of a young woman under the influence of unwholesome Manhattan sophisticates; like the previous year’s City on Fire by Garth Risk Hallberg, it is a nostalgic paean to the city’s recent past.”
—Kirkus Reviews