I Met Myself in October: A Memoir of Belonging (Paperback) 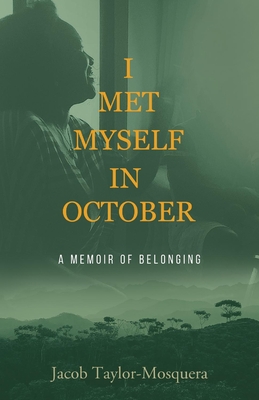 By Jacob Taylor-Mosquera
$28.05
Unavailable at this time.

I Met Myself in October: A Memoir of Belonging is a thought-provoking true adventure discussing international/transracial adoption and what it means to belong to two countries and two families.

Taylor-Mosquera weaves together the intricacies of struggling to belong to the Black and Latinx communities in the United States while enjoying white privilege without being white. He masters the Spanish language and goes on live television in Colombia to find his biological family twenty years after they learn of his secret birth. The tensions that arise therein are magical and disturbing, with each page offering intimate details about an international quest to truly belong.

The book opens with a foreword from fellow adoptee and adoption consultant, Astrid Castro then moves into the introduction from the author. This is followed by a map of Colombia and the city of Cali, relevant to the memoir itself. Nine chapters follow, detailing how the author first became acquainted with his country of origin at the age of 18 and following him throughout his developing relationship with the country and his biological mother's family. The epilogue discusses a slight twist in the story regarding the author's continued search for his biological father who still does not know he exists.

Jacob Taylor-Mosquera is an enthusiastic people connector in the extensive international adoption community. He regularly networks, promotes and participates in adoption-related events in the Pacific Northwest in the United States. Jacob also simultaneously provides informal cultural and linguistic consulting to other Latin American adoptees across the U.S., Europe and Australia. He completed his undergraduate studies at Pacific Lutheran University in Tacoma, Washington and his master's degree at the Universiteit Leiden in Leiden, Netherlands.

In addition, Jacob is the Head of Spanish Language Communications at DecodingOrigins.com, a website for the anthology titled Decoding our Origins: The Lived Experiences of Colombian Adoptees. The book was written by seventeen Colombian adoptees living across multiple countries. The contributing authors aim to help Colombian adoptees search for and reunite with their biological families by purchasing DNA test kits with the proceeds from the anthology.