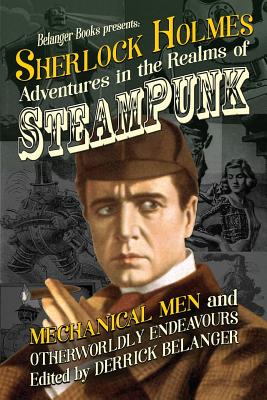 The World's Greatest Detective in the Retro Futuristic Realms of Steampunk Imagine a slight change to our historical timeline where the Industrial Revolution heated up much quicker than expected. Technological marvels such as airships, trains, battleships, and submarines came into being much earlier. They were followed by steam-powered wonders such as mechanical men, flying ships, and even crafts capable of reaching the deepest fathoms of the sea or traveling to distant celestial orbs.That is the world where Sherlock Holmes and his Boswell, Dr. Watson find themselves in Sherlock Holmes: Adventures in the Realms of Steampunk. Mechanical Men and Otherworldly Endeavours - Volume two of the anthology features stories with a focus on robotic creatures and otherworldly adventures. See Holmes team up with intelligent animals from an alternate Earth, switch bodies with Dr. Watson, and travel to another dimension. -The Adventure of the Purloined Piston Valve by L.S. Reinholt & Minerva Cerridwen (The Dragon of Ynys )- The Deductive Man by Paul Hiscock (Under the Weather)- The Adventure of the Tiger's Topaz by Derrick Belanger (Sherlock Holmes: The Adventure of the Primal Man)- Sherlock Holmes and the Moongate Sabotage by Derek Nason (Sherlock Holmes: Adventures in the Realms of H.G. Wells Vol. 2 )- The Adventure of the Brompton Mausoleum by Paula Hammond (Alternative Truths)- A Second Case of Identity by S. Subramanian (Airship 27: Sherlock Holmes, Consulting Detective) - Doctor Bear, I Presume by Harry DeMaio (The Casebooks of Octavius Bear) -The Adventure of the Violent Violets by Dr. Watson (The Adventures of Sherlock Holmes)Plus an introduction by Editor Derrick Belanger.