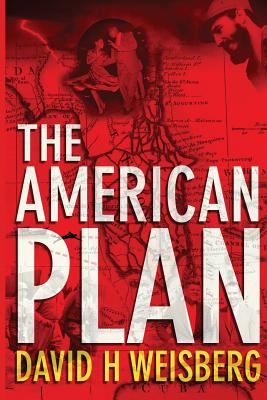 A daring and disturbing tale of survival set in Cuba and South Florida during the 1950s and early 60's, embracing both the breadth of historical fiction and the intimate intensity of a psychological suspense novel, The American Plan is a vertiginous ride through the mid-century American psyche.

David Weisberg is a teacher, playwright, critic and fiction writer. He holds a Ph.D. in English from the CUNY Graduate Center and has taught at Hunter College in New York City, the University of Delaware, and Wesleyan University in Middletown, CT. He is the author of "Chronicles of Disorder" (SUNY Press, 2000) a groundbreaking study of Samuel Beckett’s fiction in the context of the vehement cultural and aesthetic polemics of mid-century Europe; "Altitude Sickness," a play in two acts (directed by Brad Mays, Theater 22, NYC, spring 1985); co-translator, with Regina Gelb, of Stanislaw Witkiewicz’s dramatic masterpiece "The Shoemakers" (directed by Mark Sussman, Center for the Arts Theater, Wesleyan University, Fall 2000) and "Totem and Taboo," a play in three acts (directed by Graham Smith, Central Works, Berkeley CA, winter 2016). His shorter works have appeared in The Albuquerque Alibi, The Tennessee Review, The Mississippi Review, Nepantla: Views from the South, Libido, Nerve.com and other journals. "The American Plan" (Habitus Books, forthcoming, April 2017), his debut novel, is the inaugural volume of three-novel series chronicling the rise and fall of Sun Belt America, from the Korean War through the financial debacle of 2008. He currently lives in Berkeley CA.

“A grand, sweeping, postwar novel and a hard-boiled thriller…The American Plan never loses the pounding sense of uncertainty and risk that makes it a page-turner.”
-- Foreword Clarion Reviews

“The American Plan is an exceptional pleasure, a sweeping tale of a soldier wounded in the Korean War who lands in pre-revolutionary Cuba, crosses the Florida Straits, and settles amid the scrub palmetto in the languor and humidity of southwest Florida. Philip Narby, clutching his fifth of Jim Beam and torn by internal demons, is an unlikely bit player in the runaway development that marked the mid-century Florida dream. The novel unfolds with rich detail of the Sunshine State, from the mangrove-choked estuaries to the hotels and dive bars of Miami Beach. As Narby awaits his cut of war-generated corruption, falling for a lithesome New York abstract artist and dwelling with her on a remote barrier island, the reader soon realizes that Narby’s story is the American Dream itself, shorn of its myths, rocked by racism, fueled by insatiable desires and reconfigured by powerful forces of nature.”
-- Tim Johnson, international correspondent for McClatchy News, author of Tragedy in Crimson: How the Dalai Lama Conquered the World but Lost the Battle with China.


“It’s Faulkner meets Hiaasen in David Weisberg’s debut novel of lust, intrigue, greed, and environmental destruction set against the backdrop of Jim Crow race relations in Cold War Florida. Through the character of Philip Narby, a Korean War deserter with a hazy past and shady associates, Weisberg makes vivid Florida’s former tropical sensuality as it was being buried by the juggernaut of suburban sprawl. The novel’s great achievement is to contemplate the political sleaze and petty dreams behind Florida’s development while telling a compelling story that kept me turning pages late into the night. Readers will never think of Florida the same.”
-- Gail Hollander, Associate Professor of Geography, Florida International University, author of Raising Cane in the ‘Glades: The Global Sugar Trade and the Transformation of Florida.


“Engrossing…. An intriguing antihero’s perspective on his life and times.”
— Kirkus Reviews


“The American Plan has history in its DNA.”
-- Benjamin Hale, author of The Evolution of Bruno Littlemore and The Fat Artist and Other Stories.


“The American Plan is a page-turner -- beautifully written, with a cast of unforgettable and edgy characters and containing disturbing insights into an earlier era in U.S. history.”
-- Jack Litewka, author, editor, consultant.