And The Children Shall Lead (Paperback) 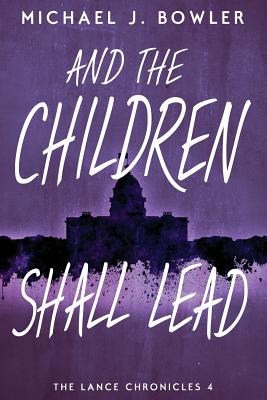 The campaign to save California's children was only the beginning. Now Lance and Ricky target America's most sacred document - The Constitution.

Native American teens Kai and Dakota--harboring secrets of their own--join the crusade and swear undying loyalty to Lance. They carry the hope of their people that the movement will better the lives of Indian children, who are inexcusably neglected by government. This new campaign will take the young people to The White House, the halls of Congress, and beyond in their quest to change the prevailing opinion that children are property, rather than human beings in their own right.

But an unseen nemesis stalks Lance and ratchets up the attacks on New Camelot, promising to destroy all that Arthur has put in place.

"You were right, little boy, death is coming for you, but slowly, and only after it takes out the people you love." These chilling words haunt Lance, but also strengthen his resolve to protect the people he loves. Or die trying.

Michael J. Bowler is an award-winning author of seven novels--A Boy and His Dragon, A Matter of Time (Silver Medalist from Reader's Favorite), and The Knight Cycle, comprised of five books: Children of the Knight (Gold Award Winner in the Wishing Shelf Book Awards), Running Through A Dark Place, There Is No Fear, And The Children Shall Lead, and Once Upon A Time In America. His horror screenplay, "Healer," was a Semi-Finalist, and his urban fantasy script, "Like A Hero," was a Finalist in the Shriekfest Film Festival and Screenplay Competition. He grew up in San Rafael, California, and majored in English and Theatre at Santa Clara University. He went on to earn a master's in film production from Loyola Marymount University, a teaching credential in English from LMU, and another master's in Special Education from Cal State University Dominguez Hills. He partnered with two friends as producer, writer, and/or director on several ultra-low-budget horror films, including "Fatal Images," "Club Dead," and "Things II," the reviews of which are much more fun than the actual movies. He taught high school in Hawthorne, California for twenty-five years, both in general education and to students with learning disabilities, in subjects ranging from English and Strength Training to Algebra, Biology, and Yearbook. He has also been a volunteer Big Brother to eight different boys with the Catholic Big Brothers Big Sisters program and a thirty-year volunteer within the juvenile justice system in Los Angeles. He is a passionate advocate for the fair treatment of children and teens in California, something that is sorely lacking in this state. He has been honored as Probation Volunteer of the Year, YMCA Volunteer of the Year, California Big Brother of the Year, and 2000 National Big Brother of the Year. The "National" honor allowed he and three of his Little Brothers to visit the White House and meet the president in the Oval Office. He is currently at work on a horror/suspense novel based on his screenplay, "Healer." You can find him at: www.michaeljbowler.com FB: michaeljbowlerauthor Twitter: BradleyWallaceM Blog: www.sirlancesays.wordpress.com tumblr: http: //michaeljbowler.tumblr.com/ Pinterest: http: //www.pinterest.com/michaelbowler/pins/ Instagram: StuntShark