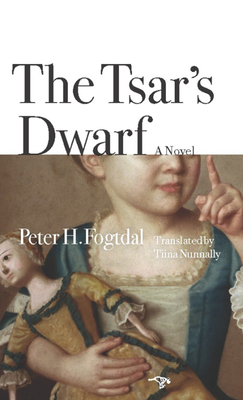 Soerine, a deformed female dwarf from Denmark, is given as a gift to Tsar Peter the Great, who is smitten by her freakishness and intellect. Against her will, the Tsar takes Soerine to St. Petersburg, where she becomes a jester in his court. There, she lives a life that both compels and repels her. Soerine eventually gives in to the attentions of Lukas, the Tsar's favorite dwarf, and carves out an existence for herself amidst the squalor and lice-ridden world of dwarfs in the early 18th century. In this inhospitable milieu, Soerine's intelligence and detached wit provide her some small measure of protection -- until disaster strikes in the shape of a priest who wants to "save" her. The Tsar's Dwarf is a masterfully told and brilliantly translated novel about aberration, endurance, and the human condition.

Peter H. Fogtdal was born in 1956 in Copenhagen, Denmark, and has a degree in playwriting from Cal State Fullerton. He is the author of twelve novels in Danish. Three have been translated into French, and two into Portuguese. In 2005 he won The Francophonian Literature Prize (Le Prix Litteraire de la Francophonie) for Le Front Chantilly. The Tsar's Dwarf is his first novel in English. Peter H. Fogtdal shares his time between Portland, Oregon, and Copenhagen, Denmark.