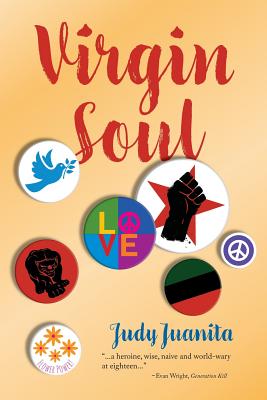 By Judy Juanita, Lisa Hix (Interviewer)
$14.95
On our shelves now at one or more of our stores

Written in first-person point of view, Virgin Soul is the semi-autobiographical tale of a young woman's struggle for identity and purpose during one of the most politically and racially charged eras of American history. Virgin Soul focuses on the college years of Geniece Hightower, "Niecy" to the aunts and uncles who raised her. At first meet, Geniece sounds like a typical young woman off to college, meeting her first boyfriend, losing her virginity, building new friendships, questioning her ideals, and juggling her busy schedule with a part-time job. A smart young African American on the cusp of revolution at Oakland City College in 1964, Geniece meets many activists and intellectuals. She begins as a reporter for the school newspaper and narrates her story with a trained journalist's ear for dialogue and gritty details. As she reports for the college newspaper on the black power movement, her own activism is sparked and eventually leads her to make a life-changing decision.

The novel has four sections: Freshman, Sophomore, Junior, Senior. As Geniece pursues her education diligently, she receives a different sort of education. The soundtrack of the sixties, the funky lingo of the sixties, protests, guns and the call for armed struggle against oppression, black friends, black lovers, black writings - all form part of a brave new world once she crosses the bridge from high school to college, from junior college to SF State, from Oakland and Berkeley to San Francisco. She describes it: "Dissidents. The streets of Berkeley were the pull for people bucking the system. Nonconformists. SF]State was pulling people like me. I was not an in-between. I was a junior facing a cast of thousands wanting to be right where I was, a part of something big, essential, swimming in the big ocean."

By her junior year she has placed herself at the center of the social maelstrom taking place across the country and in the San Francisco Bay Area, by becoming a militant, and a member of the Black Panthers. When Huey Newton is jailed in October 1967 and the Panthers explode nationwide, Geniece follows her ideals and enters the organization's world of protests, community programs, fundraising, FBI agents, police repression and fatal shootouts-- all the while struggling to complete her formal education.

Virgin Soul details the many ways in which her life is forever changed by this whirlwind of activism, drugs, romantic alliances, and friendship/comradeship. Geniece finds her identity as a woman, as an African American, and as an adult while the world around her, everything she holds dear, is in a state of flux. Through her eyes, Geniece's narrative registers the impact of the Vietnam War, Haight Ashbury hippies, the Black Panthers, and a nation at war internally and externally. With the intimacy of a memoir, this tale follows a young woman as she grows from a sexually and politically naive student into an independent woman.