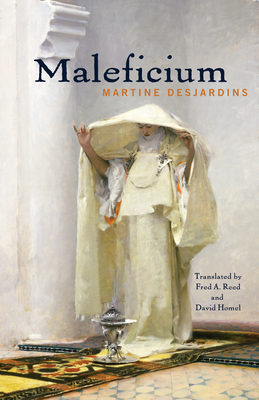 By Martine Desjardins, Fred A. Reed (Translator), David Homel (Translator)
Email or call for price.
On our shelves now:

It's been weeks since I finished t his magnificently strange book and it still won't unhand me. It's a short read that I found myself dragging out so that I might enjoy the trickle of the story. It was sensorially electric, like walking through a market full of flowers and raw meat.

Martine Desjardins delivers to readers of Maleficium the unexpurgated revelations of Vicar Jerome Savoie, a heretic priest in nineteenth century Montreal. Braving threats from the Catholic Church, Savoie dares to violate the sanctity of the confessional in this confession-within-a-confession, in which seven penitents, each afflicted with a debilitating malady or struck with a crippling deformity, relates his encounter with an enigmatic young woman whose lips bear a striking scar. As these men penetrate deep into the exotic Orient, each falls victim to his own secret vice. One treks through Ethiopia in search of wingless locusts. Another hunts for fly-whisks among the clove plantations of Zanzibar. Yet others bargain for saffron in a Srinagar bazaar, search for the rarest frankincense, and pursue the coveted hawksbill turtle in the Sea of Oman. Two more seek the formula for sabon Nablus in Palestine or haggle over Persian carpets in the royal gardens of Shiraz. The men's individual forms of punishment, revealed through the agency of the young woman, are wrought upon their bodies. Baroque in its complexity, Kafka-like in its inexorable mechanics, Maleficium by turns astonishes, amuses, and beguiles. Then author Martine Desjardins's Vicar Savoie--as in any confession worth its communion wafer--saves the best (or worst) for last. Maleficium won the Prix Jacques Brossard and was a finalist for the Governor General's Literary Award (French Fiction), the Prix des libraires du Qu bec, the Prix des cinq continents de la Francophonie, and the Prix France-Qu bec.

"The world that Martine Desjardins presents with such admirable skill in Maleficium is inhabited by fear and desire, and its reality has unsuspected depths. With its surprises, exotic voyages, and shimmering descriptions, this book is a pure pleasure to read."Canada Council for the Arts