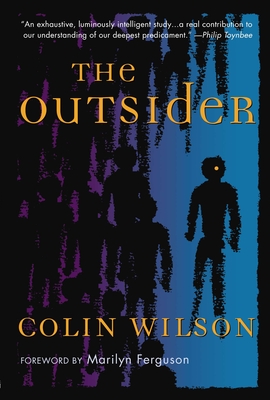 The seminal work on alienation, creativity, and the modern mind-set. "An exhaustive, luminously intelligent study...a real contribution to our understanding of our deepest predicament."—Philip Toynbee.

Born to a working class English household in 1931, Colin Wilson went from being the "bad boy" of the British literary scene to becoming a wide-ranging historian, novelist, critic, and philosopher. In addition to his classic study of rebellion, The Outsider, Wilson distinguished himself as one of the most prolific and grounded historians of occult and esoteric movements. A rebel until the end, Wilson later in life wrote stirring intellectual defenses of optimism, challenging the dark vogue of figures such as Bertolt Brecht and Samuel Beckett. He died in Cornwall, England, in late 2013.

"An exhaustive, luminously intelligent study...a real contribution to our understanding of our deepest predicament." —Philip Toynbee

"The newest prodigy on the English literary scene, Mr. Wilson came out of nowhere from the outside. He walked into literature...as a man walks into his own house ... filled with assimilated erudition ... Where young Wilson got his knowledge baffled the critics. That he had there could be no mistake." —The New York Times