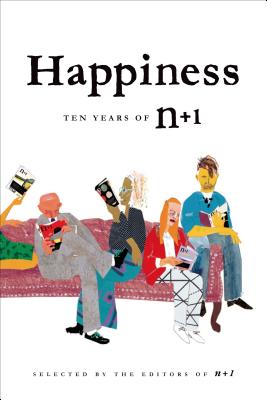 n+1 appeared in the fall of 2004, the brainchild of a group of writers working out of a small apartment. Intended to revive the leftist social criticism and innovative literary analysis that was the hallmark of the Partisan Review and other midcentury magazines, n+1 was a rejoinder to the consumerism and complacency of the Bush years. It hasn't slowed down since. n+1 has given us the most clear-eyed reporting on the 2008 crash and the Occupy movement, the best criticism of publishing culture, and the first sociological report on the hipster. No media, new or old, has escaped its ire as n+1's outspoken contributors have taken on reality TV, Twitter, credentialism, drone strikes, and Internet porn.

Happiness, released on the occasion of n+1's tenth anniversary, collects the best of the magazine as selected by its editors. These essays are fiercely contentious, disconcertingly astute, and screamingly funny. They explore our modern pursuits of happiness and take a searching moral inventory of the strange times we live in. Founding lights Chad Harbach, Keith Gessen, Benjamin Kunkel, Marco Roth, and Mark Greif are featured alongside Elif Batuman, Rebecca Curtis, Emily Witt, and other young talents launched by n+1.

“[n+1's] biggest contribution lies not in advancing a particular set of ideas but in promoting a certain way of thinking, wide-ranging and curious but demanding and rigorous. Happiness: Ten Years of n+1 illustrates the off-kilter ambition that has made it invigorating to read. The book showcases some of the new voices the publication has brought to prominence, reprinting bold and singular essays from Elif Batuman, Emily Witt, Wesley Yang and Kristin Dombek. These pieces amount to more than a pleasant way to pass time; they knock the reader a little off-balance . . . The stories collected here . . . are the kind that make other writers wonder if they're doing it wrong . . . [n+1] is almost bizarrely unembarrassed to take seriously the ephemera of our times.” —Evan Hughes, The New York Times Book Review

“Sometimes-angry, always intelligent, deeply earnest, n+1, protesting against the glib, the slick and the trendy, is well-represented by this articulate collection.” —Kirkus Reviews