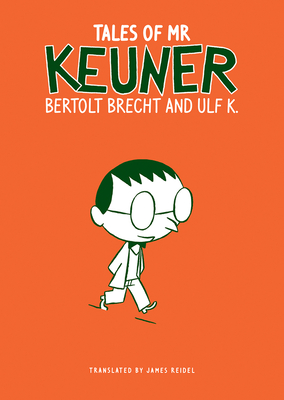 By Bertolt Brecht, James Reidel (Translated by), Ulf K. (Illustrator)
$21.50
On our shelves now at one or more of our stores

These are the class-war comics you didn't know you needed! A wry and thought-provoking collection of short comics based on the writings of Bertolt Brecht. You might not laugh, but you'll think about how life is terrible.

From the 1920s through the 1950s, Bertolt Brecht wrote a number of short, fictionalized comments on contemporary life, politics, and thought. Through the dramatic events of the first half of the twentieth century, Brecht’s Mr. Keuner offered up aphorisms, stray thoughts, and fragments of anecdote that punctured contemporary self-regard about religion, politics, business, and more. Deceptively light in tone, and bite-size in presentation, Mr. Keuner’s comments bring Brecht’s lacerating wit to bear on a wide range of the half-truths and public lies of his era.

James Reidel is a poet, translator, and biographer. In addition to collections of his own poems, he has published translations of works by Georg Trakl, Franz Werfel, Robert Walser, Thomas Bernhard, and others. A fellow of the James Merrill House, he wrote Manon’s World after nearly a decade of research.