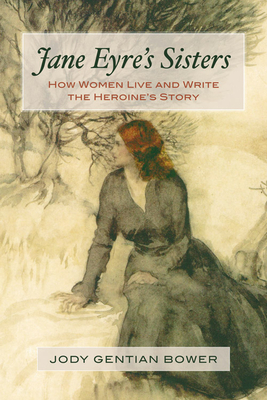 By Jody Gentian Bower, Ph.D
$18.95
Unavailable at this time.

Ever since women in the West first started publishing works of fiction, they have written about a heroine who must wander from one place to another as she searches for a way to live the life she wants to live, a life through which she can express her true self creatively in the world. Yet while many have written about the "heroine's journey," most of those authors base their models of this journey on Joseph Campbell's model of the Heroic Quest story or on old myths and tales written down by men, not on the stories that women tell.

In Jane Eyre's Sisters: How Women Live and Write the Heroine's Story, cultural mythologist Jody Gentian Bower looks at novels by women--and some men--as well as biographies of women that tell the story of the Aletis, the wandering heroine. She finds a similar pattern in works spanning the centuries, from Lady Mary Wroth and William Shakespeare in the 1600s to Sue Monk Kidd, Suzanne Collins, and Philip Pullman in the current century, including works by Jane Austen, the Brontë sisters, George Eliot, Elizabeth Gaskell, Charles Dickens, Kate Chopin, Virginia Woolf, Doris Lessing, J.R.R. Tolkien, and Alice Walker, to name just a few. She also discusses myths and folk tales that follow the same pattern.

Dr. Bower argues that the Aletis represents an archetypal character that has to date received surprisingly little scholarly recognition despite her central role in many of the greatest works of Western fiction. Using an engaging, down-to-earth writing style, Dr. Bower outlines the stages and cast of characters of the Aletis story with many examples from the literature. She discusses how the Aletis story differs from the hero's quest, how it has changed over the centuries as women gained more independence, and what heroines of novels and movies might be like in the future. She gives examples from the lives of real women and scatters stories that illustrate many of her points throughout the book. In the end, she concludes, authors of the Aletis story use their imagination to give us characters who serve as role models for how a woman can live a full and free life.

Jody Gentian Bower, Ph.D. is a cultural mythologist with a doctorate in Mythological Studies with a Depth Psychology emphasis. She maintains a blog about mythic and archetypal motifs in current culture at jodybower.com/myths-archetypes-in-film/. Currently, she teaches classes and speaks on various topics related to mythology, archetypal studies, religion, psychology, and neuroscience. She also works as a freelance writer, editor, and writing coach. She recently blogging for www.thewellwrittenwoman.com.

"Jody Gentian Bower's beautifully written treatise on "the wandering heroine" is impeccably voiced within the pages of Jane Eyre's Sisters. Her understanding of how female archetypes change cultural patterns over time is filled with historical references. It is the clearest documentation I've ever encountered on the concept of the aletis. Her skill as an author makes this a pleasurable read. Bower lays bare the ways in which women's fiction still struggles in the face of male-dominated criticism. It lays the groundwork for our next generation of women artists to change the cultural matrix again and again. I think this should be required reading for all MFA students - men as well as women." --Pamela Moore Dionne, author of the forthcoming 'Blue Truth' mystery series
— Reviews

"Finally! We who have been seeking the feminine counterpart to the masculine hero story have reason to rejoice. Aletis, the wandering heroine, is an archetypal treasure who's been with us all along, and I am deeply grateful to Jody Gentian Bower, a brilliant new pioneer in the wilderness of the soul, for introducing her in this groundbreaking book." --Jean Benedict Raffa, author of The Bridge to Wholeness, Dream Theatres of the Soul, and Healing the Sacred Divide
— Reviews

"This is a book full of those wonderful moments of familiarity that spring upon us when we find a story exactly like something we have experienced in our own lives. When women read Charlotte Bronte's Jane Eyre, for example, we find inspiration in her rebellion against her poverty and femaleness. When her determined sense of self brings her, at last, to a marvelous outcome, we rejoice with her, wondering if we can make it too. Jody Bower's many examples of women who wander 'from place to place searching for love or freedom or answers,' drawn from novels and stories, myths and folk tales, genre fiction and popular culture, women's biography and autobiography, make her book a treasure trove of epiphany and identification. Women, and men who genuinely desire to understand the true shape of women's lives, will find Bower's discernment of the differences between the journey of the male hero as outlined by Joseph Campbell and the heroine's wanderings, drawn from her large sample of readings, as illuminating as they are startling." --Annis Pratt, author of Archetypal Patterns in Women's Fiction, Dancing with Goddesses, and The Marshlanders Series (www. annisvpratt.com)
— Reviews

"Referencing mythology, fairy tales, Jungian psychology, "romance novels", science fiction, and classics from women's literature, Bower describes, dissects, and redefines the idea of women on the heroic journey. With a solid background in Depth Psychology, she has become skilled at peeling away the layers from classic archetypes in order to find the essence that truly applies to women, as well as pinpointing the ways in which society has disempowered (or empowered) those core essences. Lest you think that this book is strictly am academic exercise, know that she takes up the challenge of practical application with topics like The Power of Story and the Imagination, The Frenemy, Problematic Parents and Guardians, Marrying a Fantasy, Refusing Obligations, Sorting the Seeds, Learning Discrimination, The Home of One's Own, Transforming Communities, Leaving a Legacy, and Words as Maps. There's an amazing bibliography which can serve as an almost never-ending supply of book suggestions for a "heroine of the month" discussion group. Let customers know that Bower is bearing testimony to the fact that women truly can change the world, if they are willing to change themselves." --Anna Jedrziewski, Retailing Insight magazine
— Reviews