Through a Screen Darkly: Looking Closer at Beauty, Truth and Evil in the Movies (Paperback) 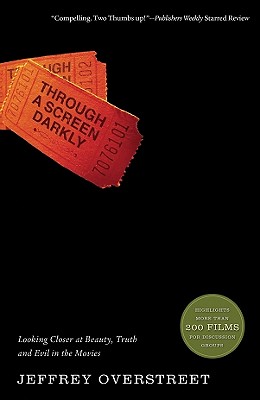 By Jeffrey Overstreet
Unavailable at this time.
Out of print

Overstreet accomplishes the surprising feat of fully convincing us that the earnest film-goer can't help but frequently have profound, even spiritual, interactions with this much abused, much misused art form. The cinematic insights here are fresh, unpredictable and spiced with material from Overstreet's interviews with some of the today's most thoughtful filmmakers.

In the style of a cinematic travel journal, film columnist and critic Jeffrey Overstreet of Christianity Today and lookingcloser.org leads readers down paths less traveled to explore some of the best films you’ve never seen. Examining a feast of movies, from blockbusters to buried treasure, Overstreet peels back the layers of work by popular entertainers and under-appreciated masters. He shares excerpts from conversations with filmmakers like Peter Jackson, Wim Wenders, Kevin Smith, Scott Derrickson, producer Ralph Winter, and stars like Elijah Wood, Ian McKellan, Keanu Reeves and the cast of Serenity, drawing “war-stories” from his encounters with movie stars, moviemakers, moviegoers and other critics in both mainstream and religious circles. He argues that what makes some films timeless rather than merely popular has everything to do with the way these artists—whether they know it or not—have captured reflections of God in their work. Through a Screen Darkly also includes a collection of reviews, humorous anecdotes and on-the-scene film festival reports, as well as recommendations for movie discussion groups and meditations on how different films echo the myriad ways in which Christ captured the attention and imagination of culture.

JEFFREY OVERSTREET calls upon a decade of experience as a film journalist for publications like Christianity Today, Image: A Journal of the Arts and Religion, Books and Culture, Paste Magazine, Seattle Pacific University's Response magazine, The Other Journal and his popular website lookingcloser.org. He frequently lectures at Seattle Pacific University and Seattle-area churches; frequently reviews films on radio talk shows in Seattle and Wisconsin; and recently participated in a panel discussion on Christians and culture with writer Dick Staub, novelist Jeff Berryman and actor Grant Goodeve for CITA (Christians in the Theatre Arts). In September 2005, Jeffrey was featured as Image journal's Artist of the Month. His film reviews were recently celebrated in a cover story in The Seattle Times' Sunday magazine, Pacific Northwest. TIME Magazine quoted him in an article about the new surge of Christian engagement with film and popular culture. He is part of a select writers' group called The Milton Center Fellowship and serves as director of an association of Christian film critics. This is his first book.