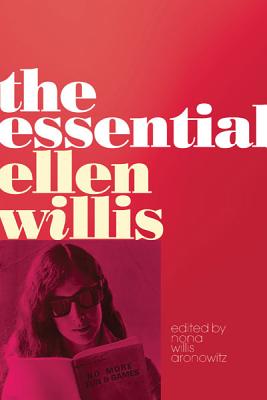 By Ellen Willis, Nona Willis Aronowitz (Editor)
$24.95
On our shelves now at one or more of our stores

Out of the Vinyl Deeps, published in 2011, introduced a new generation to the incisive, witty, and merciless voice of Ellen Willis through her pioneering rock music criticism. In the years that followed, Willis’s daring insights went beyond popular music, taking on such issues as pornography, religion, feminism, war, and drugs.

The Essential Ellen Willis gathers writings that span forty years and are both deeply engaged with the times in which they were first published and yet remain fresh and relevant amid today’s seemingly intractable political and cultural battles. Whether addressing the women’s movement, sex and abortion, race and class, or war and terrorism, Willis brought to each a distinctive attitude—passionate yet ironic, clear-sighted yet hopeful.

Offering a compelling and cohesive narrative of Willis’s liberationist “transcendence politics,” the essays—among them previously unpublished and uncollected pieces—are organized by decade from the 1960s to the 2000s, with each section introduced by young writers who share Willis’s intellectual bravery, curiosity, and lucidity: Irin Carmon, Spencer Ackerman, Cord Jefferson, Ann Friedman, and Sara Marcus. The Essential Ellen Willis concludes with excerpts from Willis’s unfinished book about politics and the cultural unconscious, introduced by her longtime partner, Stanley Aronowitz. An invaluable reckoning of American society since the 1960s, this volume is a testament to an iconoclastic and fiercely original voice.

Ellen Willis (1941–2006) was the first rock critic for the New Yorker, an editor and columnist at the Village Voice, and cofounder of the radical feminist group Redstockings. Her writing appeared in numerous publications, including Rolling Stone, the New York Times, and the Nation. She established the Cultural Reporting and Criticism program at New York University and wrote Beginning to See the Light and No More Nice Girls as well as Don’t Think, Smile! Her award-winning posthumous collection of rock criticism, Out of the Vinyl Deeps: Ellen Willis on Rock Music, was published in 2011 by the University of Minnesota Press.

Nona Willis Aronowitz is a journalist and editor. She is a cofounder of Tomorrow magazine, and a fellow at the Roosevelt Institute, coauthor of Girldrive: Criss-crossing America, Redefining Feminism, and editor of Out of the Vinyl Deeps: Ellen Willis on Rock Music.

"There’s only one word for Ellen Willis’s work—exhilarating! Her essays combine passion and moral clarity, anger and a steady commitment to having fun. Best of all, she channels the secret ecstatic undercurrents of late twentieth-century American popular culture, which we need now more than ever. This anthology is espresso for the feminist soul." —Barbara Ehrenreich

"Ellen Willis was one of the few great critics of her generation. She was theoretically sophisticated, historically informed, and courageous in her commitment to freedom. Her prose was lyrical and melodic and she was always unsettling!" —Cornel West


"It’s incredible that decades after it first made waves, Ellen Willis’s writing is still as relevant as ever. From abortion and parenting to music and politics, Willis’s cultural critiques stand the test of time and fascinate over and again. The Essential Ellen Willis reinvigorated me and reminded me why I do the work that I do. It should be required reading for anyone interested in feminism, politics, and everything in between!" —Jessica Valenti


"Gathering 53 career-spanning pieces, this is an act of reclamation, a reminder of what a piercing and brilliant writer Willis was." —Los Angeles Times

"Willis often finds her stride in complexity, and here she intricately examines and interrogates the notions of freedom she holds dear. It’s a moving example of a wonderful mind at work." —Bookforum

"The Essential Ellen Willis is watching the journalist and critic figure out how feminism translates into daily life, both for herself and for other women. Willis is intellectually rigorous and deeply idealistic, but also very fun–and her combination of curiosity, wit, skepticism, and enthusiasm grounds her work firmly in the real world." —New York Magazine's The Cut

"Achieving the kind of lucidity that never flees complexity was always her goal. Spotting the antipodes hidden in seeming allegiances—and vice-versa—was one of her specialties. Re-encountering insights and stray observations of Willis’s that had stayed messily filed in my brain for 30 years or more was an ongoing pleasure." —The American Prospect

"Reading Ellen Willis’ criticism has always been simultaneously invigorating and depressing for me—invigorating as a reminder that feminist thought can be radical and liberating and nuanced, but depressing when viewed against a 21st-century feminist landscape that too often prizes self-purification and bad-faith consensus over critical thinking and powerful ideas, which have come to seem like two more nice things we can’t have anymore." —Flavorwire

"Part of what makes Willis perennially compelling is that she was a utopian thinker, the rigorous rather than the hippie dippy kind now beloved of 1960s detractors. These essays are still capable of making you dizzy with possibility." —Fresh Air