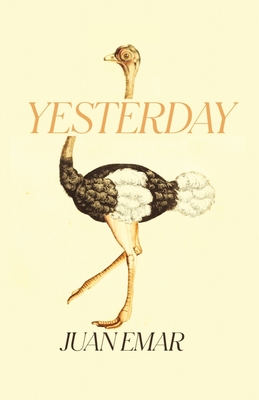 The Chilean writer, painter, art critic, and avant-garde surrealist Juan Emar has never been translated into English… but if Megan McDowell’s brilliant translation is any indication, we’ll all be Emar fanatics soon. (Many of your favorite Chilean writers probably grew up reading him.) In Yesterday’s most notable scene, an ostrich defecates a lion. I couldn’t tell you what else it’s about, but I found it all wonderful.

For the first time in English, a mind-bending, surreal masterpiece by “the forerunner of them all” (Pablo Neruda)

In the city of San Agustín de Tango, the banal is hard to tell from the bizarre. In a single day, a man is guillotined for preaching the intellectual pleasures of sex; an ostrich in a zoo, reversing roles, devours a lion; and a man, while urinating, goes bungee jumping through time itself—and manages to escape. Or does he? Witness the weird machinery of Yesterday, where the Chilean master Juan Emar deploys irony, digression, and giddy repetitions to ratchet up narrative tension again and again and again, in this thrilling whirlwind of the ecstatically unexpected—all wed to the happiest marriage of any novel, ever.


Born in Chile at the tail end of the nineteenth century, Juan Emar was largely overlooked during his lifetime, and lived in self-imposed exile from the literary circles of his day. A cult of Emarians, however, always persisted, and after several rediscoveries in the Spanish-speaking world, he is finally getting his international due with the English-language debut of Yesterday, deftly translated by Megan McDowell. Emar’s work offers unique and delirious pleasures, and will be an epiphany to anglophone readers.

Juan Emar is the pen name of Chilean writer, painter, and art critic Álvaro Yánez Bianchi. Born in Chile in 1893, he was a strong advocate of the artistic avant-garde of the 1920s and 30s, and his critical writings helped revolutionize the art scene in his country. Under-appreciated in his time, he is now considered to be one of the most important 20th-century Latin American writers.

Megan McDowell lives in Santiago, Chile. She has translated many of the most important contemporary Spanish language authors, including Alejandro Zambra, Samanta Schweblin, Mariana Enríquez, and Lina Meruane. She has been nominated four times for the International Booker Prize, and was the recipient of a 2020 Award in Literature from the American Academy of Arts and Letters.

Alejandro Zambra is the author of Bonsai, The Private Lives of Trees, Ways of Going Home, Not to Read, My Documents and Multiple Choice, among other books. Zambra is the recipient of a New York Public Library Cullman Center fellowship, and his stories and essays have appeared in publications like The New Yorker, The New York Times Magazine, The Paris Review, Granta, The Believer and Harper’s. His latest novel is called Chilean Poet and has just been published by Viking. He lives in Mexico City.

The forerunner of them all.
— Pablo Neruda

Juan Emar, the Chilean writer who bears a marked resemblance to the monument to the unknown soldier.
— Roberto Bolaño

Emar has no precedents, and no equals.
— César Aira

And there you had the madman Juan Emar writing the real Chilean prose. We have to start with him, even if nobody has read him.
— Alejandro Jodorowsky

Juan Emar (the pen name of Chilean art critic Álvaro Yánez Bianchi, 1893-1964) makes his English-language debut with a lucid and absurdist story of a single day....An introduction by Alejandro Zambra notes how Emar’s interest in the European avant-garde contrasted with Latin American literature’s prevailing realism, thus accounting for his lack of recognition. (Emar also posthumously published a massive Proustian novel called Umbral, which is still only available in Spanish.) This arresting story is a great place to start, and it will leave readers wanting to see more of the author’s odd obsessions.

The ambitious balance of playfulness and contemplation, of idea and action, race cross each page of this marvelously strange yet highly accessible novel.
— Mark Haber - Southwest Review

As Emar’s first substantial introduction to the American reading public—fifty-eight years after his death—Megan McDowell’s translation pays deft tribute to the levity, complexity, and despair of Emar’s prose, while maintaining the intellectual fortitude of a text that asks us to reconsider fundamental conceptions of identity that undergird both the popular novel and, by extension, our understanding of ourselves.
— James McGowan - Columbia Journal

Yesterday—in the original, and in Megan McDowell's witty, formal translation—is one of the sweetest, funniest novels around. It's a portrait of a happy marriage; a bizarre daylong picaresque; and a story that resists all logical comprehension.

Yesterday is not, strictly speaking, an exercise in stream of consciousness, though Emar wrings his hands as much as Joyce or Woolf over the mind’s inner-workings. Emar crams this particular day-in-the-life with spectacles, multicourse meals, visits to friends and family, and philosophical daydreams. The mind is at its most receptive, its most imaginative, he suggests, when at leisure... Emar reminds us that neither in books nor in life do we ever have direct access to reality, but that this can serve as a liberating restraint, an invitation to create.

Pablo Neruda...called him “our Kafka” and wrote, “My comrade Juan Emar will now get what here we are not stingy with: posthumous respect.” His prediction seems to have been made a few decades early, but, well, better late acclaim than never. Yesterday is a weird and charming little book, less a predictor of the magical realism to come than a sui generis detour.