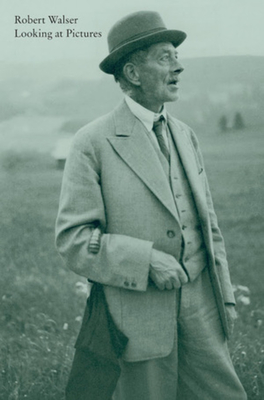 I became aware of Robert Walser through his novels (The Tannersand The Assistant). It was Walser's characters who grabbed me, but his flowing prose that kept me. This gorgeously crafted book, with tipped-in plates of the paintings, collects Walser's musings on the arts and the artists. Looking At Pictures is a lovely book wherein art is explored with whimsy and awareness.

A special side of Robert Walser: his essays on art

A beautiful and elegant collection, with gorgeous full-color art reproductions, Looking at Pictures presents a little-known side of the eccentric Swiss genius: his great writings on art. His essays consider Van Gogh, Cezanne, Rembrandt, Cranach, Watteau, Fragonard, Brueghel and his own brother Karl and also discuss general topics such as the character of the artist and of the dilettante as well as the differences between painters and poets. Every piece is marked by Walser’s unique eye, his delicate sensitivity, and his very particular sensibilities—and all are touched by his magic screwball wit.

Robert Walser (1878–1956) was born in Switzerland. He left school at fourteen and led a wandering and precarious existence working as a bank clerk, a butler in a castle, and an inventor's assistant while producing essays, stories, and novels. In 1933 he abandoned writing and entered a sanatorium—where he remained for the rest of his life. "I am not here to write," Walser said, "but to be mad."

Susan Bernofsky is the acclaimed translator of Hermann Hesse, Robert Walser, and Jenny Erpenbeck, and the recipient of many awards, including the Helen and Kurt Wolff Prize and the Hermann Hesse Translation Prize. She teaches literary translation at Columbia University and lives in New York.

Lydia Davis is the author of one novel and seven story collections. Her collection Varieties of Disturbance: Stories was a finalist for the 2007 National Book Award. She is the recipient of a MacArthur fellowship, the American Academy of Arts and Letters’ Award of Merit Medal, and was named a Chevalier of the Order of the Arts and Letters by the French government for her fiction and her translations of modern writers, including Maurice Blanchot, Michel Leiris, and Marcel Proust. Lydia Davis is the winner of the 2013 Man Booker International Prize.

Distinguished poet and translator Christopher Middleton lives in Austin, Texas. His awards include the Geoffrey Faber Memorial Prize and the Schegel-Tieck Translation Prize.

This jeweled box of a book... float[s], wonderfully, somewhere in a land between short story and criticism.
— Randy Kennedy

"Everyone who reads Walser falls in love with him."
— Nicholas Lazard

"Written between 1902 and 1930 and, with two exceptions, previously untranslated, the pieces gathered here elaborate a nervous, slapstick sort of hack journalism that set the stage for a fabulously experimental modernist writing situation whose fans included Kafka, Musil, and Benjamin."
— John Kelsey