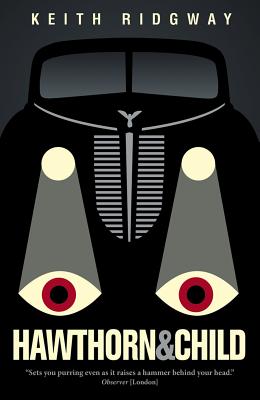 Hawthorn and his partner, Child, are called to the scene of a mysterious shooting in North London. The only witness is unreliable, the clues are scarce, and the victim, a young man who lives nearby, swears he was shot by a ghost car. While Hawthorn battles with fatigue and strange dreams, the crime and the narrative slip from his grasp and the stories of other Londoners take over: a young pickpocket on the run from his boss; an editor in possession of a disturbing manuscript; a teenage girl who spends her days at the Tate Modern; a pack of wolves; and a madman who has been infected by the former Prime Minister Tony Blair. Haunting these disparate lives is the shadowy figure of Mishazzo, an elusive crime magnate who may be running the city, or may not exist at all.

Keith Ridgway is a Dubliner and the author of the award-winning novels The Long Falling, The Parts, and Animals, as well as the collection of stories Standard Time and novella Horses.

Breathtakingly unpredictable and unapologetically strange. And the writing is perfectly assured and elegant.
— The Guardian

The London we encounter in Ridgway's unsettling new novel is a city of mystery, a cloud of fog which allows few glimpses of clarity — despite the many attempts at crime-solving made by the two police detective protagonists. Characters, with varying levels of criminality, appear and disappear: a man shot by someone in a vintage car no one else witnesses; a potentially psychopathic editor who obsesses over a strange fantasy manuscript; a pickpocket; a daughter in the throes of her first sexual relationship. In spite of the book's general obscurity, two protagonists are fully realized, intriguing characters: exact opposites, one black, straight, good-looking, and secure; the other white, gay, and neurotic. Their appearance is always a welcome moment within each chapter. Ridgway's writing is beautiful, sardonic, and well-contained. A detective novel with many crimes and few solutions concerned more with human connection (or lack thereof) than cases and clues, Ridgway's book is successfully thought-provoking and haunting.
— Publishers Weekly

An idiosyncratic and fascinating novel... refreshingly contemporary in language and style.
— Zadie Smith

The novel that has impressed, mesmerized and bamboozled me most this past year is Hawthorn and Child by Keith Ridgway. It begins as a police procedural, then spins outwards, never quite coming back to explain the mystery. Breathtakingly unpredictable and unapologetically strange. And the writing is perfectly assured and elegant
— Ian Rankin - The Guardian

There is a dreamlike quality to Hawthorn & Child's sense of causality and connection. The detectives do not solve anything, and the book’s mystery is not the crime with which it begins but the lives that hold it together. It is not the closing of any case that preoccupies the book but the perpetual openness and irresolution of all cases, all identities. That is its punch, its poetry.

Brilliantly well done. Everything about this vibrant, wonderfully written novel is alive, funny and deeply troubled. Read Hawthorn & Child. Better still read it twice: it is that real, that good, that true.

This is a mystery novel unlike any you've ever read. It's also a great one to start with if you're usually not a mystery reader. Its strangeness is reminiscent of Beckett's work, and Ridgway is a masterful storyteller.
— Largehearted Boy

Not only in its dialogue, but in its bawdy subversiveness, Hawthorn & Child is a thoroughly Irish affair. Samuel Beckett and Flann O'Brien come regularly to mind, although Keith Ridgway's blend of the grotesque and the absurd is all his own. An admirably conceived work of fiction.

Hawthorn & Child has all the moody stuff of the detective genre, but no suspects, no clues, no resolution. The novel becomes an impressionistic portrait of the London they see.