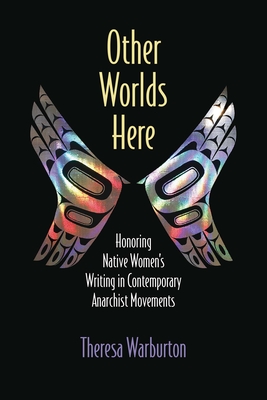 By Theresa Warburton
Unavailable at this time.

Other Worlds Here: Honoring Native Women’s Writing in Contemporary Anarchist Movements examines the interaction of literature and radical social movement, exploring the limitations of contemporary anarchist politics through attentive engagement with Native women’s literatures. Tracing the rise of New Anarchism in the United States following protests against the World Trade Organization in 1999, interdisciplinary scholar Theresa Warburton argues that contemporary anarchist politics have not adequately accounted for the particularities of radical social movement in a settler colonial society. As a result, activists have replicated the structure of settlement within anarchist spaces.

All is not lost, however. Rather than centering a critical indictment of contemporary anarchist politics, Other Worlds Here maintains that a defining characteristic of New Anarchism is its ability to adapt and transform. Through close readings of texts by Native women authors, Warburton argues that anarchists must shift the paradigm that another world is possible to one that recognizes other worlds already here: stories, networks, and histories that lay out methods of building reciprocal relationships with the land and its people. Analyzing memoirs, poetry, and novels by writers including Deborah Miranda, Elissa Washuta, Heid E. Erdrich, Janet Rogers, and Leslie Marmon Silko, Other Worlds Here extends the study of Native women’s literatures beyond ethnographic analysis of Native experience to advance a widely applicable, contemporary political critique.

THERESA WARBURTON is an associate professor of English at Western Washington University. She is the coeditor of Shapes of Native Nonfiction: Collected Essays by Contemporary Writers.

“Warburton’s examination of the complicated connections between Native American literature and the anarchist movement is a timely account that sheds light on how we are at a particular settler moment of struggles over space. Her choice of writers is exquisite and she brings new questions and approaches that charge the imagination. By situating the work not as a parallel conversation but rhetorically and with a place-based method that takes seriously the charges outlined in a myriad of Indigenous feminisms genealogies, she brings together complex movements and struggles that are aiming, albeit in various ways, to sustain other worlds, less exploitative and predatory ones, ones with abundant decoloniality. She encourages a difficult conversation between anarchists and Native and Indigenous genealogies on a global scale as if our worlds rely on it—and they do.” —Mishuana Goeman, author of Mark My Words: Native Women Mapping Our Nations

“Close readings of these texts reveal strategies that both expose the structures of settlement and recognize Native people’s lived experiences, the ‘other worlds’ that the text argues are already here.” —G. D. MacDonald, Virginia State University, CHOICE