Not the Israel My Parents Promised Me (Paperback) 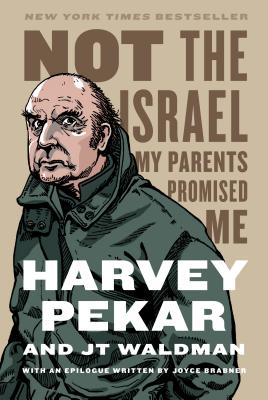 Multi-generational in scope, Pekar's and Waldman's honest conversation of Israel brings history and memory into focus. Recently released in paperback, Pekar's last graphic memoir is a reminder of the need for continuous reflection on our received identities and histories. Forceful and witty, this is a great example of Harvey Pekar's work and an excellent introduction into the development of modern Israel.

In Not the Israel My Parents Promised Me, one of the final graphic memoirs from the man who defined the genre, Harvey Pekar explores what it means to be Jewish and what Israel means to the Jews. Pekar's mother was a Zionist by way of politics, his father by way of faith, and he inevitably grew up a staunch supporter of Israel. But as he became attuned to the wider world, Pekar began to question his parents' most fundamental beliefs.

This book is the full account of that questioning. Over the course of a single day in his hometown of Cleveland, Ohio, Pekar and the illustrator JT Waldman wrestle with the mythologies passed down to them, weaving a personal and historical odyssey of uncommon wit and power. With an epilogue written by Joyce Brabner, Not the Israel My Parents Promised Me is an es-
sential book for fans of Harvey Pekar and anyone interested in the past and future of the Jewish state.

Harvey Pekar is the coauthor of Not the Israel My Parents Promised Me (Hill and Wang, 2012) and is best known for his graphic autobiography, American Splendor, which was based on his long-running comic-book series and adapted into a film of the same name. He died in 2010.

JT Waldman is an artist, interactive designer, and comic-book creator. He is the coauthor with Harvey Pekar of Not the Israel My Parents Promised Me (Hill and Wang, 2012) and the author and illustrator of the graphic novel Megillat Esther. He lives in Philadelphia.

Joyce Brabner is an award-winning author who frequently collaborated with her late husband, Harvey Pekar, on his American Splendor series. Her work includes the Real War Stories series, Activists!, Brought to Light (with Alan Moore), and Our Cancer Year (with Pekar). She lives in Cleveland Heights, Ohio.

“[Pekar's] message here is important--that a good Jew asks tough questions, that a history of oppression requires us to be more conscious of the oppressed.” —David L. Ulin, Los Angeles Times

“[T]his posthumous work by Pekar functions as a multipronged exploration of religious, political, and personal histories and is all the richer for it . . . A sweet and simple epilogue by Pekar's widow, Joyce Brabner, provides the perfect capstone.” —Publishers Weekly

“This is not only Pekar's greatest work, but probably the most powerful use of his talent for plainly speaking truth to power and ignorance. JT Waldman masterfully captures the wry innocence of Harvey's interrogation while still celebrating the subtle contours of modern American Jewishness.” —Douglas Rushkoff, author of Life Inc. and Program or Be Programmed

“A fascinating history of the so-called Promised Land--as seen through the eyes of an estranged Jew from Cleveland. Brimming with classic Pekar asides and details, the book sheds light on a subject often obscured by heat. JT Waldman's evocative artwork combines down-to-earth American Splendor–style illustrations with motifs inspired by everything from mythology and Islamic art to illuminated manuscripts and Chagall. I never got to say goodbye to Harvey, but reading this book was like having a final conversation with him.” —Josh Neufeld, American Splendor artist, and author and artist of A.D.: New Orleans After the Deluge

“Not the Israel My Parents Promised Me is Harvey Pekar's final exploration of his conflict over the history of Israel, as illuminated by JT Waldman's protean art. This is their Jewish Book of Hours.” —Dean Haspiel, artist of The Quitter and Cuba: My Revolution

“One part history lesson, one part autobiography, and all Harvey Pekar, Not the Israel My Parents Promised Me is an insightful look at one of the burning topics of our time. With Pekar's scholarship and humor and JT Waldman's stylistically varied art, this graphic book is visually entertaining and highly informative.” —Peter Kuper, artist of The Metamorphosis