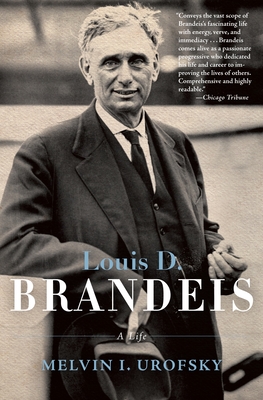 As a young lawyer in the late nineteenth and early twentieth centuries, Louis Brandeis, born into a family of reformers who came to the United States to escape European anti-Semitism, established the way modern law is practiced. He was an early champion of the right to privacy and pioneer the idea of pro bono work by attorneys. Brandeis invented savings bank life insurance in Massachusetts and was a driving force in the development of the Clayton Antitrust Act, the Federal Reserve Act, and the law establishing the Federal Trade Commission.

Brandeis witnessed and suffered from the anti-Semitism rampant in the United States in the early twentieth century, and with the outbreak of World War I, became at age fifty-eight the head of the American Zionist movement. During the brutal six-month congressional confirmation battle that ensued when Woodrow Wilson nominated him to the Supreme Court in 1916, Brandeis was described as “a disturbing element in any gentlemen’s club.” But once on the Court, he became one of its most influential members, developing the modern jurisprudence of free speech and the doctrine of a constitutionally protected right to privacy and suggesting what became known as the doctrine of incorporation, by which the Bill of Rights came to apply to the states. In this award-winning biography, Melvin Urofsky gives us a panoramic view of Brandeis’s unprecedented impact on American society and law.

MELVIN I. UROFSKY is professor of law and public policy and a professor emeritus of history at Virginia Commonwealth University.

"Will likely stand as the definitive Brandeis biography for many years."
—The Boston Globe

“Utterly fascinating . . . Urofsky’s remarkable book has innumerable passages that amaze . . . [It] captures the sweep and the details of that life with what has to be called devotion . . . his achievement is remarkable.”
—Anthony Lewis, The New York Review of Books

“Melvin Urofsky’s lapidary new biography is a rich study of a remarkable life.”
—The Economist

"Conveys the vast scope of Brandeis's fascinating life with energy, verve and immediacy. . . Brandeis comes alive as a passionate progressive who dedicated his life and career to improving the lives of others. Comprehensive and highly readable."
—Chicago Tribune

"A comprehensive biography of an American legal giant. . . likely to become the standard biography. . .An authoritative, impressive assessment of a man whose legal reasoning continues to influence our republic."
—Kirkus Reviews (starred)