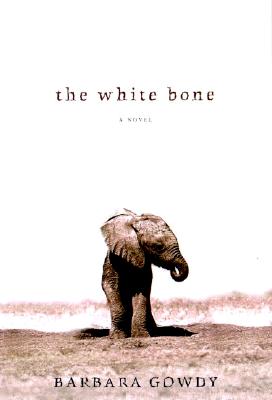 A thrilling journey into the minds of African elephants as they struggle to survive.

If, as many recent nonfiction bestsellers have revealed, animals possess emotions and awareness, they must also have stories. In The White Bone, a novel imagined entirely from the perspective of African elephants, Barbara Gowdy creates a world whole and separate that yet illuminates our own.

For years, young Mud and her family have roamed the high grasses, swamps, and deserts of the sub-Sahara. Now the earth is scorched by drought, and the mutilated bodies of family and friends lie scattered on the ground, shot down by ivory hunters. Nothing-not the once familiar terrain, or the age-old rhythms of life, or even memory itself-seems reliable anymore. Yet a slim prophecy of hope is passed on from water hole to water hole: the sacred white bone of legend will point the elephants toward the Safe Place. And so begins a quest through Africa's vast and perilous plains-until at last the survivors face a decisive trial of loyalty and courage.

In The White Bone, Barbara Gowdy performs a feat of imagination virtually unparalleled in modern fiction. Plunged into an alien landscape, we orient ourselves in elephant time, elephant space, elephant consciousness and begin to feel, as Gowdy puts it, "what it would be like to be that big and gentle, to be that imperiled, and to have that prodigious memory."

Barbara Gowdy is the author of five previous books, including "Mister Sandman "and "We So Seldom Look On Love," and she has twice been a finalist for both the Governor General's Award and the Giller Prize. She lives in Toronto, Ontario.

"Barbara Gowdy’s The White Bone (1998), a kind of tragic epic of African elephants narrated from the perspective of the elephants, undertakes to cross the boundary between species in an extraordinarily visceral, sensuous, and poetic rendering of language unparalleled in contemporary literature. You need not believe that elephants can think in language—in this case, a highly lyric English—to be enthralled by the author’s imaginative immersion in her subject, a brilliantly inspired melding of research into the lives of African elephants and the creation of a distinctly original, indeed sui generis alternative world. Inevitably, in a time in which African elephants are being ravaged by poachers and their species endangered by incursions into their natural habitat, The White Bone is not a casual reading experience. It will linger long in the memory, like an intensely unnerving yet wonderfully strange dream."
—Joyce Carol Oates, The New York Review of Books

"Inspired . . . A marvel of a book . . . The language, social structure, intellectual and spiritual world of elephants are as real as the fabric of human life. Absolutely compelling."
—Alice Munro

"Gowdy's chief accomplishment is that she manages genuinely to entrench us in the elephant psyche . . . dazzling . . . Gowdy renders this arid African landscape with a subtle gorgeousness reminiscent of Isak Dinesen."
—The Boston Globe

"Gowdy here performs her greatest creative feat yet . . . Gowdy conjures a vibrantly visceral world . . . The White Bone presents a lyrical educated guess on what elephant consciousness might feel like - including, most sadly and movingly, the perpetual threat of extinction."
—Entertainment Weekly

"Fascinating . . . Through the course of The White Bone we come to care about the elephants as much as we would humans."
—Judy Doenges, The Seattle Times

"Written like an indigenous legend, The White Bone is about the burden of memory . . . Readers who make it through will never think the same of elephants and their ‘appalling resilience.’"
—Bob Minzesheimer, USA Today

"Brave . . . Gowdy has embarked on the creation of an extremely distinct, invented world, with its own social and linguistic structures, its own myths and totems."
—Claire Messud, Newsday