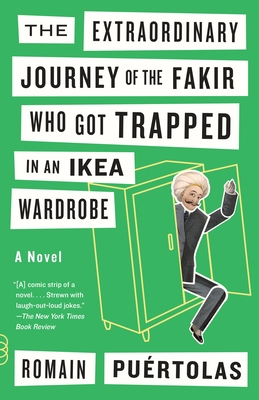 By Romain Puertolas
$17.00
Unavailable at this time.

An Indian man who has never before left his tiny village travels to a Parisian Ikea. Hilarity ensues. This is an absurd comedy-adventure but features enough heart and sincerity to make one a little teary-eyed. Already a #1 bestselling hit in France, this book is sure to make anyone smile - I mean just look at the crazy title!

A charmingly exuberant comic debut, The Extraordinary Journey of the Fakir Who Got Trapped in an Ikea Wardrobe is the globetrotting story of a trickster from rural India and his adventure of a lifetime.

When the fakir—a professional con artist—arrives in Paris, he has just one goal: to get to Ikea. Armed with only a counterfeit hundred-euro note in the pocket of his silk trousers, he is confident that he has all he needs to thrive. But his plan goes horribly awry when he hides inside a wardrobe at the iconic Swedish retailer—the first in a series of accidents that will send him on a whirlwind tour across Europe.

Pursued across the continent by a swindled taxi driver dead set on revenge, our fakir soon finds unlikely friends—from movie stars to illegal immigrants—in even unlikelier places. And, much to his own surprise, his heart begins to open to those around him as he comes to understand the universal desire to seek a better life in an often dangerous world.

Channeling the manic energy of the Marx Brothers and the biting social commentary of Candide,Romain Puértolas has crafted an unforgettable comic romp around Europe that is propelled by laughter, love, and, ultimately, redemption. (Meatballs not included but highly recommended.)

Romain Puértolas was born in Montpellier and has lived in France, Spain, and the U.K., where he has been a DJ, singer-songwriter, language teacher, translator-interpreter, and steward. He most recently worked as a police inspector with the French border service, specializing in document fraud. The Extraordinary Journey of the Fakir Who Got Trapped in an Ikea Wardrobe was a number-one best seller in France and has been published in thirty-five countries.

“[A] comic strip of a novel. . . . Strewn with laugh-out-loud jokes.” —The New York Times Book Review

“A philosophical odyssey. By turns slapstick and serious.” —The Wall Street Journal

“Combines farce worthy of Laurel and Hardy with socio-political satire.” —The Washington Times

“Who would have thought that a comedy that mixes flat-pack furniture with magic could tackle some of the biggest subjects of our time? With a big heart, a brilliant sense of humour and an excellent translator, that’s what French writer Romain Puértolas achieves.” —The Independent

“Full of quirky charm. . . . [A] hilarious and touching journey towards redemption and self-knowledge. Delightful.” —The Times (London)

“As astonishing and original as its title—and disarming to boot. . . . Romain Puértolas has given us an amalgam that is both pointed in its social criticism and—dare it be said—charming enough to make Voltaire cringe. . . . It’s fable and it’s farce. It’s satire and it’s spoof. It’s brash and it’s stirring.” —The Anniston Star

“Brilliant . . . A fable, a farce, but also and above all, a delicious satire of the modern world.” —Le Figaro Magazine

“A madcap romantic adventure. . . . Blessed with an energetic bonhomie that’s thoroughly endearing.” —The Mail on Sunday

“Wryly comic. . . . That rare beast: a novel full of heart and conscience that never takes itself too seriously.” —The Guardian (UK)

“If you believe in zen and the art of flat pack furniture, this is the book for you.” —Sunday Express

“As sprightly as it is funny. . . . [Puértolas] piles up the vivid scenes along with oodles of puns.” —L’Express (France)

“A manic fairy tale peppered with wry observations and social criticism. . . . It charms with its exuberance and satirical sensibility. . . . [Puértolas] delights in puns while satirizing consumerism and the capriciousness of the immigration system.” —Shelf Awareness