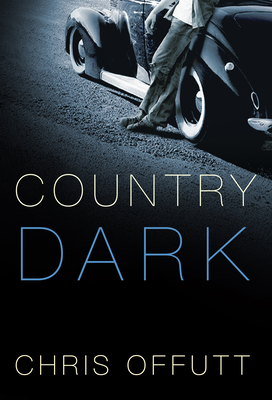 “Country Dark spans 1954 to 1971, opening with Tucker's return home from the Korean War, where he had special training in killing other men, to rural Kentucky near the Ohio border, where he takes up a job as a driver in a bootlegging operation. Tucker is devoted to his rural home life and to his young wife and children, and once their way of life is threatened, he understands he may have to employ his wartime skills to keep it together. Chris Offutt's new novel is almost impossible not to race through, but it also must be savored for its artful but unpretentious phrasing, and for its many surprises, which we won't talk about here.”
— Richard Howorth, Square Books, Oxford, MS

“Following his razor-sharp and honest memoir, My Father the Pornographer, Chris Offutt demonstrates that he is on a creative roll with his first work of fiction in almost 20 years, and I’m here to tell you that it is worth the wait. Offutt mines his Kentucky roots to tell the tale of Tucker, a young Korean War vet who returns home to the hills and works as a bootlegger until the state comes for his family and he is forced to react with violence. Written in spare yet lyrical prose and filled with unforgettable characters, Country Dark is a taut backwoods noir that brings to mind James Dickey at the height of his powers.”
— Cody Morrison, Square Books, Oxford, MS

Chris Offutt is an outstanding literary talent, whose work has been called "lean and brilliant" (New York Times Book Review) and compared by reviewers to Tobias Wolff, Ernest Hemingway, and Raymond Carver. He's been awarded the Whiting Writers Award for Fiction/Nonfiction and the American Academy of Arts and Letters Fiction Award, among numerous other honors. His first work of fiction in nearly two decades, Country Dark is a taut, compelling novel set in rural Kentucky from the Korean War to 1970.

Tucker, a young veteran, returns from war to work for a bootlegger. He falls in love and starts a family, and while the Tuckers don't have much, they have the love of their home and each other. But when his family is threatened, Tucker is pushed into violence, which changes everything. The story of people living off the land and by their wits in a backwoods Kentucky world of shine-runners and laborers whose social codes are every bit as nuanced as the British aristocracy, Country Dark is a novel that blends the best of Larry Brown and James M. Cain, with a noose tightening evermore around a man who just wants to protect those he loves. It reintroduces the vital and absolutely distinct voice of Chris Offutt, a voice we've been missing for years.

Chris Offutt is the author of the short-story collections Kentucky Straight and Out of the Woods, the novel The Good Brother, and three memoirs: The Same River Twice, No Heroes, and My Father, the Pornographer. His work has appeared in Best American Short Stories and Best American Essays, among many other places. He has written screenplays for Weeds, True Blood, and Treme, and has received fellowships from the Lannan and Guggenheim foundations.