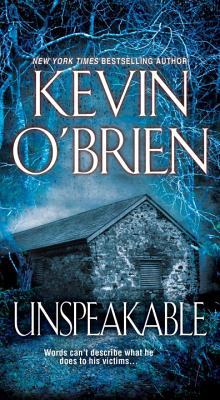 A family of four murdered in their hotel room. A single mother and her boyfriend both stabbed to death. A sordid history of violent crimes, repeated over and over--but decades apart. . .

Olivia Barker is a therapist with no connection to the murders. But she has heard things. Stories that keep her up at night. Details that only a killer would know. A killer who could be one of her patients. . .

Olivia has no proof for her suspicions. But as the body count rises, so do her fears. A rock is thrown through her window; her car tires are slashed; a chilling message is scrawled on her bathroom mirror. Olivia knows she's getting closer to the truth. But the truth could be the last thing she'll ever know. . .

"A genuine page-turner." --The Seattle Times

"O'Brien slowly builds the suspense of the story until it reaches its explosive end." --Suspense Magazine

KEVIN O’BRIEN is the New York Times and USA Today bestselling author of over twenty suspense novels. Before his books landed him on the bestseller lists, he was a railroad inspector who wrote at night. He moved from the train tracks to become a full-time author in 1997 when his novel, Only Son, was picked up by Reader’s Digest and optioned for film. Since then, his books have been translated into fourteen languages. Born and raised in Chicago, O'Brien now lives in Seattle, where he is on the board of Seattle 7 Writers, a collective of bestselling, award-winning authors. He can be found online at KevinOBrienbooks.com/.