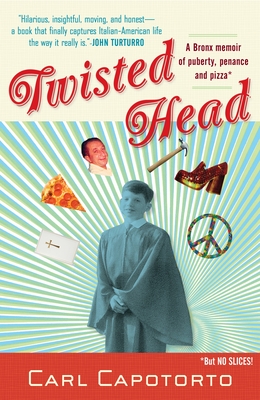 By Carl Capotorto
$14.00
Unavailable at this time.

“Carl Capotorto's Twisted Head is a spirited memoir of growing up as the only son in a working class Italian-American family during the '60s and '70s in New York City. Rich with tales from home, the family business, school, work, and friends, fans of memoirs of David Sedaris and Augusten Burroughs will find this tale kinder and gentler.”
— Jean, Books Galore, Watkinsville, GA

What's in a name? For Carl Capotorto, everything is in a name. The literal translation from Italian to English of Capotorto is "twisted head." This is no accident. Carl grew up in the Bronx in the 1960s and ’70s with the Mangialardis ("eat fat") and Mrs. Sabella ("so beautiful"), incessant fryers and a dolled-up glamour queen. Carl's father, Philip Vito Capotorto, was the obsessive, tyrannical head of the family--"I'm not your friend, I'm the father" was a common refrain in their household. The father ran Cappi's Pizza and Sangwheech Shoppe, whose motto was "We Don't Spel Good, Just Cook Nice." It was a time of great upheaval in the Bronx, and Carl's father was right in the middle of it, if not the cause of it, much to the chagrin of his long-suffering mother.

Twisted Head is the comedic story of a hardscrabble, working-class family's life that represents the real legacy of Italian-Americans--labor, not crime. It is also the poignant memoir of the author's struggle to become himself in a world that demanded he act like someone else. Tragic and funny in equal measure, Carl's story is propelled by a cast of only-in-New-York characters: customers at the family pizza shop, public school teachers, nuns and priests at church, shop owners and merchants--all wildly entertaining and sometimes frightening. Somewhere in all the rage and madness that surrounded Carl in his youth, he found the bottom line: he loved his family, but he had to let them go. Twisted Head is an exorcism of sorts. With plenty of laughs.

CARL CAPOTORTO was born and raised in the Pelham Parkway section of the Bronx, New York. He received an M.F.A. in playwriting from Columbia University School of the Arts in 1984 and has been a playwright, screenwriter, and actor for more than twenty years. He made his acting debut in the cult classic Five Corners; performed principal roles in American Blue Note, Men of Respect, Spike Lee's Jungle Fever, and John Turturro's Mac; and played Little Paulie on The Sopranos for six seasons. Twisted Head is based on his solo show of the same name, which he has performed in New York and Los Angeles. He currently lives in Manhattan.

"A wonderful reading experience. You don't have to be Italian to be moved by this powerfully touching memoir."
–Mario Cuomo

"Not since Mario Puzo's novel The Fortunate Pilgrim have readers been treated to such a sweet and sour tale of growing up Italian-American and of coming to appreciate the sturdy rock that is family."
–Ken Auletta


"I couldn't put it down. It's one of the most hilarious descriptions of growing up Italian I have ever read."
–Nick Pileggi, author of Wiseguy


"Like an Italian grandmother hugging you fiercely to her bosom, Carl's memoir of his upbringing in the Bronx doesn't let go . . . until you realize the melancholy one finds in joy and the joy one finds in melancholy.  A splendid and insightful read–as funny as it is sad."
–Lewis Black


"Carl Capotorto's book feels like a Sunday dinner as a kid–familiar and warm. It' s filled with the same peculiarities, complications, and profoundly specific characters . . . all portrayed with great warmth and generosity of spirit. It made me fall in love with my own imperfect family all over again."
–Edie Falco


"Take Russell Baker, throw in a little David Sedaris, then simmer with olive oil for Twisted Head, a memoir as poignant as it is hilarious.  Anyone who's ever had a family–Italian-American or otherwise–will love it."
–Terence Winter, Executive Producer - The Sopranos


"Hilarious, insightful, moving, and honest–a book that finally captures Italian-American life the way it really is. Wonderfully entertaining, it made me laugh, cry, and remember a world that is slowly disappearing."
–John Turturro


"Carl Capotorto is unrelenting and wise in this hilarious yet poignant portrait of a young Italian-American's coming of age by the heat of his father's pizza kitchen in the Bronx. Written with honesty, verve and hope, Capotorto's story is totally original yet deeply familiar–an autobiography to savor. I can't wait for the sequel!"
–Adriana Trigiani, bestselling author of Big Stone Gap, Big Cherry Holler and other novels

"Carl's journey ends with what we now call 'closure.' But the long and winding road to that point is filled with as much sweetness and pleasure as a chocolate cannoli."
--EDGE