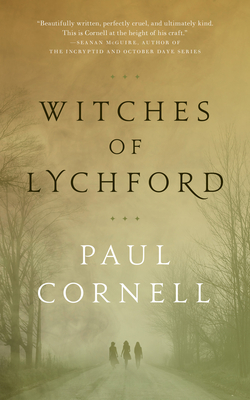 This is book number 1 in the Witches of Lychford series.

Three small-town witches band together to stop a corporate big-box store from demolishing the market square in order to build a new shopping complex, because only they know it will open a gateway to the netherworld.

The villagers in the sleepy hamlet of Lychford are divided. A supermarket wants to build a major branch on their border. Some welcome the employment opportunities, while some object to the modernization of the local environment.

Judith Mawson (local crank) knows the truth -- that Lychford lies on the boundary between two worlds, and that the destruction of the border will open wide the gateways to malevolent beings beyond imagination.

But if she is to have her voice heard, she's going to need the assistance of some unlikely allies...

PRAISE FOR Paul Cornell's THE WITCHES OF LYCHFORD

"At once epic and terribly intimate. This is the story of a village, not a city, and all the more powerful for that; not all big fantasy needs an urban setting. Beautifully written, perfectly cruel, and ultimately kind. This is Cornell at the height of his craft." — Seanan McGuire, New York Times bestselling author of the InCryptid and October Daye series

"Rich in charm... local politics and witchcraft writ small and personal, but large in consequence. [Cornell] adeptly describes the emotion of magic; its effects and internal ignition of wonder. The feel of being exposed to magic for the first time and the feel of doing magic and having it done to you have never been better described in any story." — Bill Willingham, author of Fables and Down the Mysterly River

"Masterfully creepy and sinister, all the more so for taking place in the beautifully drawn English countryside." — Jenny Colgan, author of Doctor Who: Into the Nowhere

Paul Cornell has written episodes of Elementary, Doctor Who, Primeval, Robin Hood and many other TV series, including his own children’s show, Wavelength. He’s worked for every major comics company, including his creator-owned series Saucer State for IDW and This Damned Band for Dark Horse, and runs for Marvel and DC on Batman and Robin, Wolverine and Young Avengers. He’s the writer of the Lychford rural fantasy novellas from Tor.com Publishing. He’s won the BSFA Award for his short fiction, an Eagle Award for his comics, a Hugo Award for his podcast and shares in a Writer’s Guild Award for his Doctor Who. He’s the co-host of Hammer House of Podcast.

“Refreshing and suspenseful, this novella is an inventive look at the idea of magic lurking just beyond one's reach. ” —Publishers Weekly

"The deftness with which Cornell permits us to glimpse their backstories gives Witches of Lychford the feel of a much longer novel... [we get some] satisfying glimpses of those fireworks, along with a few ghosts and genuinely scary apparitions." —Locus

“Every detail in this novella is interesting and authentic.The novella is a beautiful gem that has more depth than many a novel, while being entertaining, fun and well-paced. It's not a word too long, not a word too short: it's practically perfect in every way.” —Bastian's Book Reviews