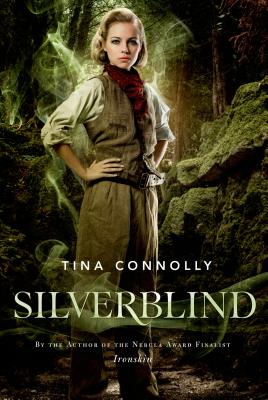 By Tina Connolly
Unavailable at this time.
Out of print

This is book number 3 in the Ironskin series.

Dorie Rochart has been hiding her fey side for a long time. Now, finished with University, she plans to study magical creatures and plants in the wild, bringing long-forgotten cures to those in need. But when no one will hire a girl to fight basilisks, she releases her shape-changing fey powers—to disguise herself as a boy.

While hunting for wyvern eggs, she saves a young scientist who's about to get steamed by a silvertail—and finds her childhood friend Tam Grimsby, to whom she hasn't spoken in seven years. Not since she traded him to the fey. She can't bear to tell him who she really is, but every day grows harder as he comes to trust her.

The wyverns are being hunted to extinction for the powerful compounds in their eggs. The fey are dying out as humans grow in power. Now Tam and Dorie will have to decide which side they will fight for. And if they end up on opposite sides, can their returning friendship survive?

TINA CONNOLLY lives with her family in Portland, Oregon, in a house that came with a dragon in the basement and blackberry vines in the attic. She is the author of the Ironskin series (Ironskin, Copperhead, Silverblind) and her stories have appeared all over, including in Strange Horizons, Lightspeed, and Beneath Ceaseless Skies.

“This is an astonishing book: an evocative re-imagination of Jane Eyre that concerns itself with beauty, love, and social upheaval. This lyrical and utterly marvelous debut is one of the standout books of the year.” —RT Book Reviews, 4 ½ Stars, Top Pick! on Ironskin

“Connolly has created a complex and well-drawn world here, and the story is indeed an original and imaginative take on the gothic-fiction tradition. An intriguing and ambitious fantasy tale.” —Kirkus Reviews on Ironskin

“All the romance, mystery, and horror that a good gothic story needs.” —Portland Monthly on Ironskin