When the Heavens Fall: The Chronicles of the Exile, Book One (Mass Market) 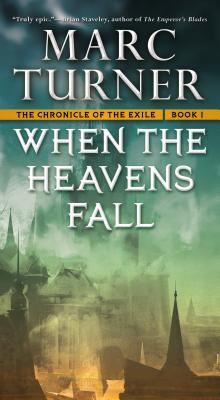 By Marc Turner
Unavailable at this time.
Out of print

I told myself I would only read completed series, then I read the description. It may not be perfect but this book is just the right mixture of fantasy adventure and intricate world building. If you're looking for a new epic fantasy to fall into, When the Heavens Fall is a great place to start.

Marc Turner's When the Heavens Fall is an emerging new voice in epic fantasy, now in mass market

If you pick a fight with Shroud, Lord of the Dead, you had better ensure your victory, else death will mark only the beginning of your suffering.

A book giving its wielder power over the dead has been stolen from a fellowship of mages that has kept the powerful relic dormant for centuries. The thief, a crafty, power-hungry necromancer, intends to use the Book of Lost Souls to resurrect an ancient race and challenge Shroud for dominion of the underworld. Shroud counters by sending his most formidable servants to seize the artifact at all cost.

However, the god is not the only one interested in the Book, and a host of other forces converge, drawn by the powerful magic that has been unleashed. Among them is a reluctant Guardian who is commissioned by the Emperor to find the stolen Book, a troubled prince who battles enemies both personal and political, and a young girl of great power, whose past uniquely prepares her for an encounter with Shroud. The greatest threat to each of their quests lies not in the horror of an undead army but in the risk of betrayal from those closest to them. Each of their decisions comes at a personal cost and will not only affect them, but also determine the fate of their entire empire.

MARC TURNER was born in Toronto, Canada, but grew up in England. He graduated from Lincoln College, Oxford University, in 1996 with a BA (Hons) in Law, and subsequently worked at a top-ten law firm in London. After more than ten years in the legal profession he gave in to his lifelong writing addiction and now works full time as a writer. When the Heavens Fall is his first novel.

“Turner has taken many familiar and popular fantasy elements and made them his own.... As a result, it's a pretty dark, gothic tale and world. I have a feeling this is going to be a hit with fantasy fans of all types. Definitely recommended.” —Civilian Reader

“It's increasingly rare that an epic fantasy can manage to sustain my interest through the climax, and keep me reading closely, enjoying the details and nuances, as opposed to skimming ahead to find out how it all ends. The darkness, the magic, and the very idea of power really appealed to me here, and I felt Turner did a masterful job of building the story towards that climax. It's a story that just got bigger, deeper, and more intriguing with each new revelation.” —Beauty in Ruins

“This is a very large and intricate web that Marc Turner has spun... The ending is truly superb.... New and refreshing.” —The BiblioSanctum

“One of the go-to books of the genre.” —Starburst Magazine