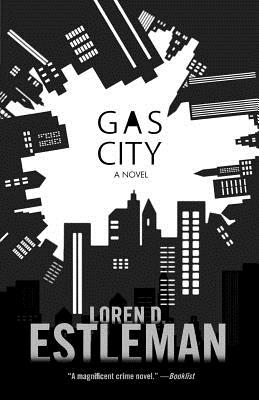 Calling upon his considerable novelistic skills, Loren D. Estleman exposes the black heart of a seemingly stable, well-run city suddenly pitched into violence and chaos. A delicate balance of forces—greed and corruption, ambition and desire—run out of control in the wake of a serial killer's grisly rampage.

A power struggle—between a police chief who has looked the other way for too long, a Mafia boss who holds the city's vices in his powerful grasp, and media reporters looking for a big story—turns what has been a minor dispute into a desperate struggle for survival.

Setting this drama, Gas City, in a blue-collar metropolis dominated by an oil company, Estleman, with an unerring eye for telling detail and an ear for dialogue that reveals the secret desires of his characters, crafts a fascinating, deadly tapestry of love, ambition, revenge, and redemption, a stunning portrait of the human condition.

Loren D. Estleman is the author of more than eighty novels, including the Amos Walker, Page Murdock, and Peter Macklin series. The winner of four Shamus Awards, five Spur Awards, and three Western Heritage Awards, he lives in Central Michigan with his wife, author Deborah Morgan.

“Loren D. Estleman's knife-edged serial-killer thriller, Gas City is pared to its very bone… Estleman, in the leanest prose possible, brings to life not just his characters but the vices that fuel them and, in the process, exposes the gritty, ragged, sordid underbelly of urban life. He's been called an heir to Chandler -- and it's easy to see why. A ” —Entertainment Weekly

“May be the prolific Estleman's most thought-provoking and emotionally engaging novel among the 60 or so he's written. Its subject is contemporary rust-belt politics as a human phenomenon and the way that a politician's compromises can affect both the citizenry at large and the individuals who make up that citizenry. Each of the half-dozen plotlines is executed flawlessly and presented in a context of moral ambiguity in which every choice--whether self-serving or altruistic--has consequences both good and evil. A magnificent crime novel.” —Booklist (Starred Review)

“Portrait of a city by an old master... The chronically undervalued Estleman ( American Detective, 2007, etc.) serves up what just might be the best novel about urban political corruption since Dashiell Hammett's The Glass Key.” —Kirkus (Starred Review)

“It is as if Sinclair Lewis or Theodore Dreiser had written a contemporary crime novel while suddenly developing a sense of humor.” —Otto Penzler, New York Sun

“Estleman's spare dialogue; unhurried, self-assured storytelling style; and understated and profound use of symbolism make this a novel to savor.” —Paul Goat Allen, The Chicago Tribune

“Forget honors for an individual book – Estleman, in his prime at 56 years old, is as deserving as anyone of MWA's Grand Master Award, recognizing a formidable contribution to mystery fiction. And it better happen soon, before ‘undervalued' becomes a permanent prefix to his name.” —Eddie Muller, San Francisco Chronicle