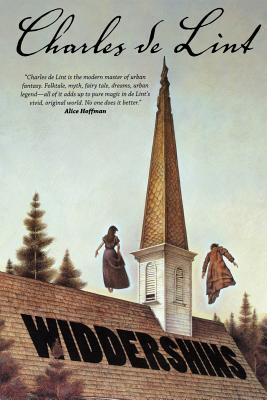 I looked at this cover for years, always on my way down the aisle towards the restroom. Each time I saw it, I vowed to read it... 7 years later I did. It is a fun jaunt through a magical world filled with fairies, shapeshifters, and the humans that are attuned to them and it has a great cover!

In Widdershins, fantasy author Charles de Lint has delivered one of his most accessible and moving works of his career.

Jilly Coppercorn and Geordie Riddell. Since they were introduced in the first Newford story, "Timeskip," back in 1989, their friends and readers alike have been waiting for them to realize what everybody else already knows: that they belong together. But they've been more clueless about how they feel for each other than the characters in When Harry Met Sally. Now in Widdershins, a stand-alone novel of fairy courts set in shopping malls and the Bohemian street scene of Newford's Crowsea area, Jilly and Geordie's story is finally being told.

Before it's over, we'll find ourselves plunged into the rancorous and sometimes violent conflict between the magical North American "animal people" and the more newly-arrived fairy folk. We'll watch as Jilly is held captive in a sinister world based on her own worst memories--and Geordie, attempting to help, is sent someplace even worse. And we'll be captivated by the power of love and determination to redeem ancient hatreds and heal old magics gone sour.

To walk "widdershins" is to walk counterclockwise or backwards around something. It's a classic pathway into the fairy realm. It's also the way people often back slowly into the relationships that matter, the real ones that make for a life.

Charles de Lint and his wife, the artist MaryAnn Harris, live in Ottawa, Ontario, Canada. His evocative novels, including Moonheart, Forests of the Heart, and The Onion Girl, have earned him a devoted following and critical acclaim as a master of contemporary magical fiction in the manner of storytellers like John Crowley, Jonathan Carroll, Alice Hoffman, Ray Bradbury, and Isabel Allende.

“As familiarly as though he were chronicling the lives of old friends, de Lint spins yet another magical story of the intersections between reality and the faerie and spirit world in this latest addition to the Newford opus, his twin loves of storytelling and music-making shining through every page....[H]ighly recommended.” —Library Journal (starred review) on Widdershins

“De Lint weaves the individual characters' stories into a tight-knit whole....Many of his faithful readers see the people he has created as kin they want to keep up with. Walk widdershins (i.e., counterclockwise) once and you may, too.” —Booklist (starred review) on Widdershins

“This pleasing addition to the popular Newford saga brings series characters Jilly Coppercorn and Geordie Riddell together in a romantic relationship that's anything but simple…. inevitably recalls Neil Gaiman's American Gods, to which this more intimate and folksy book compares favorably.” —Publishers Weekly on Widdershins

“Books like Widdershins can be read with tremendous pleasure, and regular readers will find themselves slipping easily back into de Lint's comforting… world.” —The Ottawa Citizen

“Sentimental, wildly imaginative follow-up to The Onion Girl.... Despite the convoluted lineages, a rather sweet relationship novel.” —Kirkus Reviews on Widdershins

“The author's many fans will welcome this intricate melding of his themes and characters.” —VOYA on Widdershins

“De Lint is a master stylist, and the tale of Jilly and Geordie's slow but inevitable coming together is told with extraordinary sensitivity and grace.” —Romantic Times Bookclub (4.5 star review) on Widdershins

“[V]intage de Lint and a perfect example of how his nontraditional approach to faerie works so well....Charles de Lint is one of my all-time favorite authors and...Widdershins...stand[s] up as some of the best writing he has done.” —Colleen Mondor, BookSlut, on Widdershins

“I've praised de Lint's writing in the past, but I've run out of superlatives for Widdershins. It is easily one of the best--if not the best-- novels in his vast library.” —Tom Knapp, Rambles.net, on Widdershins

“This broad, captivating fantasy involves love and magic and features a fairy court set in a contemporary mall.” —Dallas Morning News on Widdershins

“I do recommend Widdershins very highly.… chalk it up to de Lint's masterful storytelling, because he is a storyteller of the highest order. The characters alone are worth the time…. And of course, there is that blend of the magical and the real that only de Lint seems to be able to pull off.” —Green Man Review

“Imagine me, your humble book reviewer, down on my knees with my arms extended above my head, bowing at the waist in worship over and over before a book set upon an altar. Well, after reading Widdershins, the extraordinary new novel by Charles de Lint, I not only wanted to bow in worship to the book, which I consider the best thing I've read in the last couple of years (if not longer), but to the author as well. Anyone with this kind of talent for storytelling and dreamweaving deserves his own altar.… Five stars is just not enough. Widdershins is an experience not to be missed. Just start walking counter-clockwise…” —Curled Up With a Good Book on Widdershins