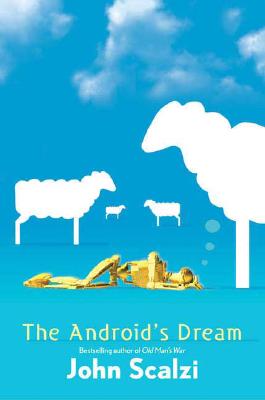 A human diplomat kills his alien counterpart. Earth is on the verge of war with a vastly superior alien race. A lone man races against time and a host of enemies to find the one object that can save our planet and our people from alien enslavement...

That's right, a sheep. And if you think that's the most surprising thing about this book, wait until you read Chapter One. Welcome to The Android's Dream.

For Harry Creek, it's quickly becoming a nightmare. All he wants is to do his uncomplicated mid-level diplomatic job with Earth's State Department. But his past training and skills get him tapped to save the planet--and to protect pet store owner Robin Baker, whose own past holds the key to the whereabouts of that lost sheep. Doing both will take him from lava-strewn battlefields to alien halls of power. All in a day's work. Maybe it's time for a raise.

Throw in two-timing freelance mercenaries, political lobbyists with megalomaniac tendencies, aliens on a religious quest, and an artificial intelligence with unusual backstory, and you've got more than just your usual science fiction adventure story. You've got The Android's Dream.

John Scalzi's science fiction novels include "Old Man's War, The Ghost Brigades, " and "Agent to the Stars." His published nonfiction includes "The Rough Guide to the Universe" and "The Book of the Dumb." His weblog Whatever is one of the longest-established such sites on the Internet. He lives in Ohio with his wife and daughter.

"Gripping and surpassingly original. It's Starship Troopers without the lectures. It's The Forever War with better sex. It's funny, it's sad, and it's true." --Cory Doctorow on Old Man's War

"Astonishingly proficient…This virtuoso debut pays tribute to SF's past while showing that well-worn tropes still can have real zip when they're approached with ingenuity." --Publishers Weekly (starred review) on Old Man's War

"Solid…[Scalzi] sidesteps most of the cliches of military science fiction, delivers fast-paced scenes of combat and pays attention to the science underpinning his premise." --San Francisco Chronicle on Old Man's War