The Gift of the Magi (Hardcover) 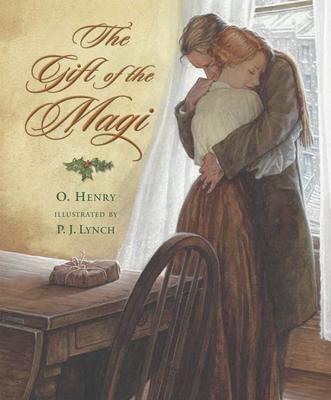 O. Henry's classic tale of the wisest gifts of Christmas, brought to life by P.J. Lynch's extraordinary art, is itself a gift to share and treasure.

In a shabby New York flat, Della sobs as she counts the few coins she has saved to buy a Christmas present for her husband, Jim. A gift worthy of her devotion will require a great sacrifice: selling her long, beautiful hair. Jim, meanwhile, has made a sacrifice for Della that is no less difficult. As they exchange gifts on Christmas Eve, the discovery of what each has done fills them with despair, until they realize that the true gifts of Christmas can be found more readily in their humble apartment than in any fine store. O. Henry paints a masterly portrait of unfaltering love, a haven from the harsh world outside. The poignancy of his story is captured in P.J. Lynch's eloquent art, wherein every glance, every gesture, tells a subtle truth.

O. Henry, aka William Sydney Porter, was born in North Carolina in 1862. A master of the short story, he wrote hundreds of tales whose wry humor and plot twists, often amusing or ironic, have earned him a place as one of the best-loved American writers. He died in 1910 at the age of forty-seven.

P.J. Lynch is the celebrated illustrator of many beloved and acclaimed books, including A CHRISTMAS CAROL, THE BEE-MAN OF ORN, and IGNIS. He has won the Kate Greenaway Medal twice, for THE CHRISTMAS MIRACLE OF JONATHAN TOOMEY and WHEN JESSIE CAME ACROSS THE SEA. He lives in Ireland.